I really have an amazing husband. Seriously, I can go on and on about how he takes care of me, how he loves me unconditionally, how he makes me smile...all of the time.

But, let's be real. These tickets? They give him an asterisk.

I'd love to say that Sean and I would be able to have this playoff experience without Steve, but it just wouldn't be the same. Steve and I have attended some pretty spectacular sporting events, but we have never ever paid for an NBA ticket. Because Steve has dedicated 21 years of his life to the Cavalier organization, Sean and I are watching our beloved Cavaliers - our home town team - live and in person. Thanks Steve! 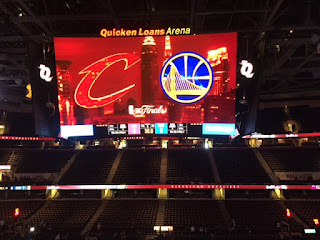 Is this a dream?

Game 6 of the 2016 NBA Finals was the best sports experience of my life. There wasn’t the madness outside like 2007, but we’re talking about the NBA FINALS and Game 6 is when the Cavs went on to win their second straight to even the series at 3-3 and force a Game 7. Sean and I were there in person to experience it in all its guts and glory and it was a really fun game to watch.


We started the night at the casino with a beautiful slice from Rocco & Rosie's, followed by good cheap drinks in the Diamond Lounge with Kevin and Lisa. 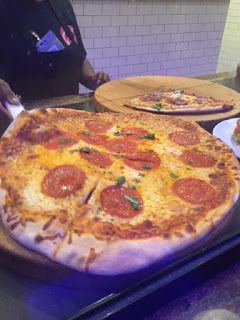 We had the same exact seat location at Game 3, so we knew that was a good start. 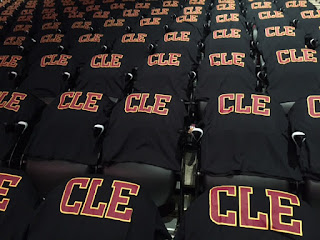 Cleveland came out of the gate with a strong presence. LeBron scored 9 points on 4-5 FG while Kyrie and Tristan both added 7 apiece as the Cavs took a resounding 31-11 lead at the end of the first. A strong first quarter put Golden State on edge and although they made us uneasy at times, they were never able to recover.

LeBron outplayed Stephen Curry and delivered another stellar performance. With 41 points, 11 assists, eight rebounds four steals and three blocked shots, he dominated the game on both ends of the floor. He scored 17 of the Cavs 35 points in the 4th quarter to lead the Cavs to their last home victory of the season.

Kyrie Irving added 23 points while Tristan Thompson earned his paycheck and proved to be a difference-maker with his 15 points and 16 rebounds. 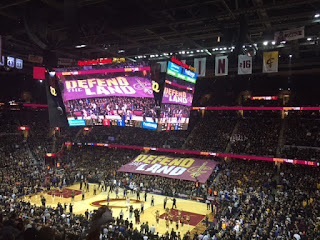 The Cavs held a 24-point second-half lead, but the Warriors climbed back to within seven points. Cleveland didn't let them get too comfortable as LeBron led a drive where he had his hand in 27 consecutive points and 35 of 36 to extend the Cavs lead.

Meanwhile, Curry cried his way to the locker room after being ejected with 4:22 left in the game following his sixth personal foul and throwing his mouthpiece into the crowd. Curry finished with 30 points while Klay Thompson had 25 and Draymond Green had 10 rebounds. 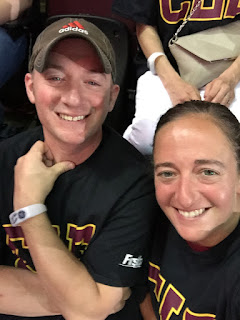 I even met up with one of my housemates from college at halftime. Maggie and I went to high school together and then both went to UD. We were neighbors our freshman year and then lived together during our sophomore and junior years. Maggie met her husband Breese at Dayton, so I guess you can say Breese was also a housemate of mine :) 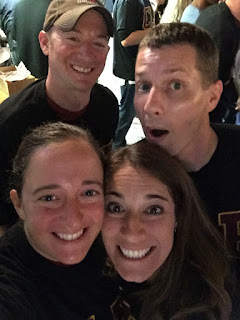 Now we're going back to Cali for a decisive Game 7. If this same Cavs team shows up, they'll be a tough team to beat. 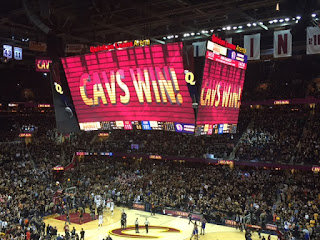 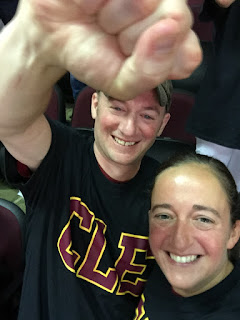 Although Sean initially wanted to go straight home because there "was nothing to celebrate" he quickly changed his mind when we stepped outside into the masses. Machine Gun Kelly's "CLE Til' I Die" was blasting from the outdoor stage. We decided to take it #ALLIN for a few minutes and then headed down the street for a couple of post-game drinks. Eventually, Steve finished up at work and it was time to close up shop. Good night Cleveland. We'll see you on Sunday. 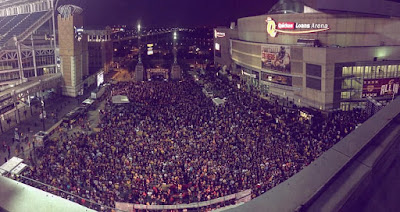 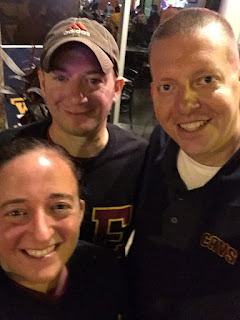 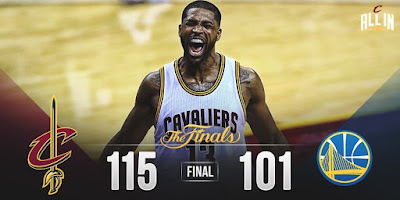 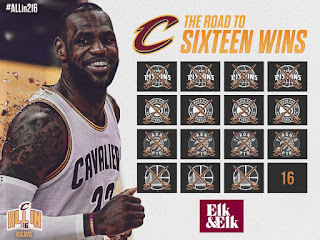