Back on May 17th, I ran the Cleveland 10K. I signed up so I had motivation to run every week other than for its overall fitness value. I struggled through the 6.2 miles, but knew that I enjoyed running and wanted to do more of it. I didn’t have speed, but I had endurance…I wanted to run farther. The following week, I signed up for the Akron Half Marathon. I figured I could increase my mileage over the next four months and accomplish this feat that seemed downright ridiculous. My supportive husband thought I had gone a little crazy, but as usual, he jumped on my bandwagon and listened to my boring stories and training methods. As September 26th quickly approached, I became more and more nervous. I’m not sure why. I didn’t doubt that I would finish. I guess I just didn’t want to disappoint myself. I wasn’t doing this for anyone but myself. No one else had put in the hours or the miles. No one else had to push through on days when the last thing I wanted to do was run 8 miles. I wanted to make myself proud.

The Akron course was not “flat and fast” as many other courses advertise. Instead, there was a bit of variety and more hills than I had planned. It wasn’t terrible, but once I hit the first hill I immediately threw my goal of 2:23 out the window! When I came to the 11.5 mile mark and the biggest hill yet…I didn’t have the kindest words to say. I remember reading the course description, “at this point, runners will quickly realize, what just went down, must go back up. There are several climbs over the next mile…” As I looked up that hill, I was happy to finish at 2:30. When I finally did cross the finish line at 2:32:31, I was overwhelmed with emotion. I had to hold back tears as I searched for Steve in the crowd. I didn’t care what time I finished because I had just run 13.1 miles. I achieved a goal that I had busted my ass for over the last several months and I was proud. It was the best run of my life.

I look forward to running more half marathons in the future. I’ve already signed up for the Myrtle Beach Half on February 13th as well as Cleveland’s on May 16th. I’ve already been asked whether I aspire to run the full 26.2 and my honest answer is no...for now. At this point I still look at 13.1 miles as awesome and impressive. I think that if I trained for a full marathon, running would become an addiction rather than a hobby. When I run, it’s time that I have alone and I love it. I never want to dread that time that I take for myself and I never want the people around me to resent running because it takes me away from them…So, for now I am proud of what I have accomplished and look forward to the next time I get on the open road and race again. 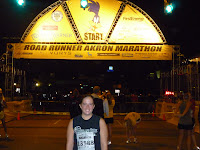 Here I am before the race. At about 60 degrees and very little humidity, it was great running weather. As you can see it was still dark out...The race started at 7:00 am, but the sun didn't rise until 7:15 am.

Here I am crossing the finish line! 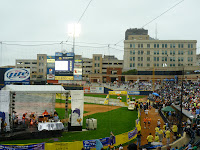 The finish was Olympic-style on the field of Canal Park Stadium (home of the Indians AA farm team, Akron Aeros) so the stadium seats were filled with spectators. It was pretty neat.

Michelob Ultra was one of the race sponsors so I received free beer afterward. As terrible as it sounded immediately following the race, I was happy to oblige after I tore up a sandwich and bottle of water.

Steve planned a celebratory dinner the night of the race. After I took a much-needed nap, we were picked up by our personal car service (Thanks Sean & Alex!) and headed to Lakewood's own Pier W...a nice restaurant located on Lake Erie with a great view of the city. Steve had won an auction at work that included "Dinner for 2...with a value up to $200!!!" There wasn't any way we could spend $200 on food, but we sure did our best :) After we ordered Crab Cakes, Oysters Rockefeller, Lobster Bisque, Chopped Salad, Surf & Turf (2), Creme Brulee and Tiramisu...the grand total came to $144! Let's just say it was an awesome meal and a great celebration :)

As we waited for our ride, we took some pictures outside. It's really a great location with a nice view of the city. Ahh...what a day.
Posted by Shannon at 12:27 PM 1 comment: