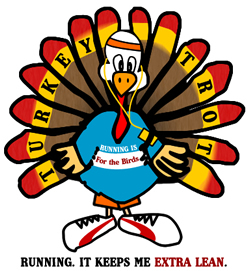 On the morning of Thanksgiving I ran a 5 mile Turkey Trot around downtown Cleveland. It was a balmy 41 degrees with a slight drizzle, but nothing too terrible as I was dressed for the colder temps. As a race spectator, Steve was surely more miserable than I was. There were nearly 5,500 runners so it was a crowded race throughout. I finished in 50:20 (10:04 min/mile) and 143 of 261 in my age/gender group. 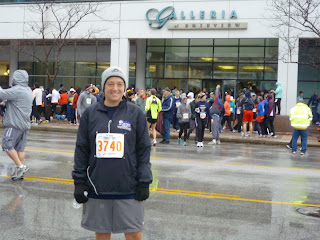 Thursday afternoon/evening we headed to my cousin Matt's house. He and his wife Jenny were hosting their first holiday and we were honored to be invited. We were joined by my Dad, Berneda, Sean and Alex. It was a nice small group with fantastic food. We ate, drank, talked, watched movies and sat by the fire. It was a very nice and relaxing way to spend the day.
Posted by Shannon at 6:09 PM No comments:

My nephew Daniel had a sleepover with Sean and Alex on Friday so we joined them for dinner, bowling and ice cream. Malley's is an ice cream parlor that we really enjoy and have taken the kids to on many occasions. On this particular trip, the five of us decided to indulge in "The Ultimate Sundae" which includes 10 scoops of ice cream (we choose...chocolate,.vanilla, cookies n' cream, moose tracks, cookie dough & chocolate peanut butter), 4 toppings (peanut butter, caramel, hot fudge & marshmallow), 2 kinds of nuts (spanish peanuts & cashews), whipped cream, sprinkles and cherries. I am certain that there were MANY more than 10 scoops, which you can see from the picture. When we checked out, the guy that made the sundae said it weighed 4.5 lbs and was just under a gallon!! I guess you can say we did our best, but didn't come close to finishing it. The sundae cost us $19.95, but Daniel's expression is priceless... 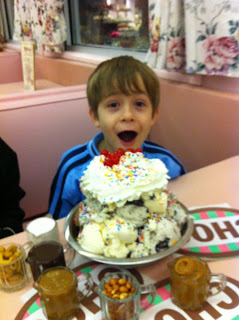 Posted by Shannon at 4:18 PM No comments:

We're Going to the SEC Championship! 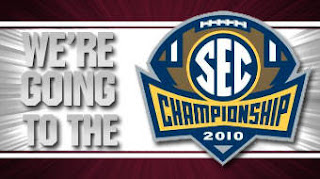 For the first time in school history, South Carolina won the SEC East and are headed to the SEC Championship game. The Gamecocks will face Cam Newton (unless, of course, all of the allegations against him come to fruition and he is ineligible!!) and the Auburn Tigers on December 4, 2010 at 4:00 pm.

Minutes after South Carolina defeated Florida to clinch the East title, we booked our flights and hotel. We figured we would deal with getting tickets later. We soon went onto eBay, Stubhub, RazorGator, and any other online ticket site only to find that the cheapest ticket available was $300+ and those are BAD seats...nosebleed seats in a 71,250 seat venue. We're really fine with bad seats because the atmosphere is what really makes the game, but to pay that much is crazy. We knew this would be a hot ticket considering there are no sales to the general public and South Carolina and Auburn only get 15,900 tickets per school (not many considering USC has an 88,000 seat venue and approximately 30,000 students)...All other tickets go to sponsors and a few to other SEC schools. 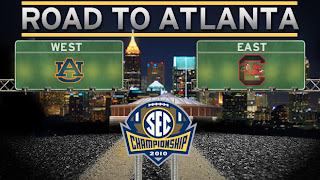 So, we got thinking. We knew a friend who has been a season-ticker holder for years, but didn't want to put him in a position where he'd feel obligated to sell any extra tickets to us...and it actually turns out that he was unable to get tickets because the season-ticket holder/doner lottery is based on a "point" system. The bottom line is...$$$ donated = tickets. After a little more brainstorming, we decided to contact an old colleague from the Cavs who is currently an Associate Athletic Director at Tennessee (another SEC East school). We had met up and had a few drinks with he and his wife (another former Cavs/Rockers employee) at the Final Four in Indianapolis so Steve gave it a try...he sent him an email and within a few days we had 4 tickets at $125 face value in our possession. When we received them in the mail, we realized these weren't just any seats, these were prime lower level seats at the 30-35 yard line! Seats similar to this are selling for $750 apiece online... 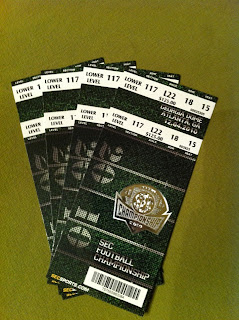 We admit we got really lucky, but it obviously doesn't hurt to know the right people :)
Here is the seating chart...

The game will be played at the Georgia Dome in Atlanta, GA. Steve and I will be joined by our friends and USC alumni Jon & Cal as well as countless other USC fans. We're looking forward to it!
Go Gamecocks!
Posted by Shannon at 11:08 AM No comments: