Following 6 weeks of frustration, x-rays, bone scans and finally an MRI...I have officially been diagnosed with a femoral neck stress fracture (the part of the femur that meets the hip) This a very common injury in long distance runners and the reason is fairly simple...overuse. I found the following information online, which better explains the injury:

Bones can usually adapt to repetitive stress, and any change in the function of a bone causes it to change the way it is built. This is how small bumps and ridges form on bones. The tendons pull on these areas, and the bone adapts by building up. This is normal. But extreme stress repeated too often can overwhelm the bone's ability to adapt. This is especially true when someone suddenly begins a new, strenuous, repetitive activity such as running. 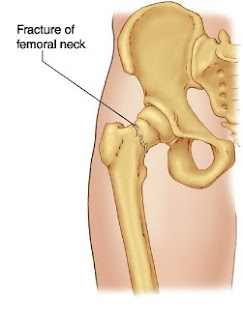 Essentially, I became obsessed with something and I overdid it. Now I have to pay the consequences. I blame the Myrtle Beach half marathon :) I couldn't have trained better and more perfectly than I did for that race. I peaked, I tapered, and then they cancelled.
P.S. I made sure to take advantage of the $30 registration for next year!!! Bring it on...
Anyway, I was determined to qualify for the D.C. half marathon so I continued to train and ran the half marathon in Columbus, OH on February 28th...that's where I missed the mark. I continued to increase my miles when I should have been decreasing them. Shortly after that race, I didn't feel the same. I took a few days off and attributed my right hip pain to the 13.1 miles of pavement that I had forced on my legs. I tried a 6 miler later that week and then a 4 miler and it wasn't good...another 4 miler the next week and it was only worse. I had gone from 30 miles a week to a painful 4 miles a week. I knew it was time to see the doctor. After several x-rays and a bone scan, I still had no diagnosis.
I had another 4 weeks until I could meet with an orthopedic doctor. She works with runners and knew exactly what symptoms to look for. I had done hours of research on my own and had already "self-diagnosed" of course :) She was pretty confidant that I had a stress fracture and that the bone scan was untimely. She ordered an MRI on Friday (5/21), hoping it would show any damage to muscles, tendons or bones. On Tuesday (5/25) I learned of my results...and that's where I am right now. A femoral neck stress fracture. I have 6 weeks of crutches ahead of me (3 weeks non-weight bearing & 3 weeks partial weight-bearing) then an additional 3 weeks of weight-bearing rest. No running.
Taking time off from running has been hard. I went from 110 miles in February to 58 miles in March, April & May combined. Due to doctor's orders, I've not been able to do any running, walking, biking or elliptical so I've taken up swimming over the past several weeks. Thanks to my dad, I've been swimming for over 30 years. Similar to running, I'm not fast, but I can go the distance and have built my stamina to a mile a day. It's exhausting, boring and takes a heck of a lot longer! I'm lucky to have a YMCA next door to my work and a membership to go along with it! 8-10 weeks from now, I hope to be hitting the pavement (...or at least the treadmill) and get my stride back. It'll be worth the wait.
Posted by Shannon at 12:07 AM No comments: