I have highly publicized the annual Lakewood Wing Crawl that takes place every August and this blog has received a lot of street cred as a result. Knowing how much fun an event like that is, a group of us put our heads together and created our 1st Annual Lakewood Taco Crawl. This wasn't really "organized" other than Kevin created a Facebook event and I mapped out the destinations. We were all on our own for purchasing food and drinks and ensuring we got through the 5.4 miles by the time 2 am rolled around. My initial list had 11 stops, but after a few hiccups (see below), we ended up visiting eight.

We were 16 strong as we departed our house and headed 0.6 miles south to La Plaza Supermarket. Yes, it is a Mexican grocery store and they have some delicious and authentic tacos!

La Plaza is located at 13609 Lakewood Heights Blvd. on the southern boarder of Lakewood and Cleveland and their taco cart can be found outside on most days. If not, head inside near the butcher and they'll make them. You will not be alone! 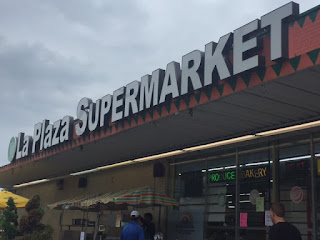 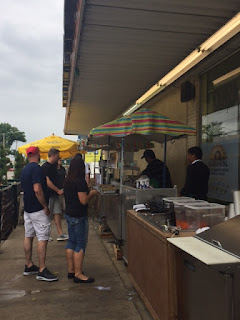 Steve and I ordered the barbacoa and carnitas at $2 each. 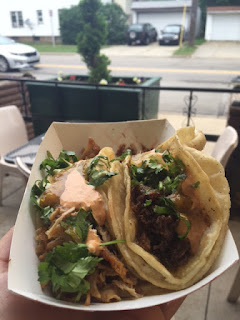 Our next stop was another 0.6 miles north to Taco Tontos located at 13319 Madison in Lakewood. We nearly took over their entire dining room and enjoyed the best drinks on the crawl. Steve and I shared a (large) chicken hard taco which put us back $4.50. I also ordered a hand-crafted grapefruit margarita. The bartender and server were busting their a** to serve us and we were not disappointed. 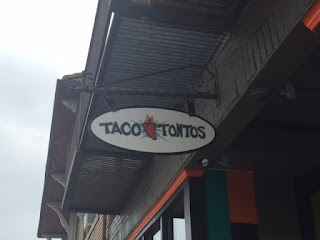 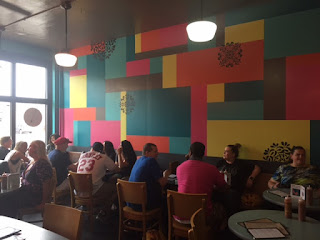 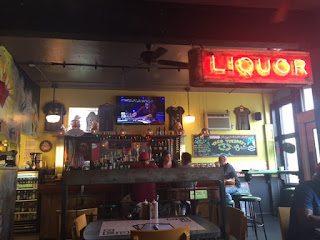 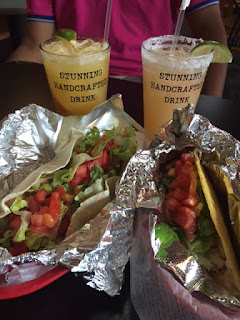 The third stop took us 0.5 miles west to El Tango Latin Grill located at 14224 Madison. Although we have enjoyed the food in the past, the service has always been really...unfriendly. Steve and I debated about including them on the list for this reason and the man in the big white hat did not disappoint! He actually refused to serve us due to the size of our group. We understood that 16 people arriving at one time could be a little daunting, but we were sharing so would have likely ordered around 10 tacos for the group and either ordered a drink to stay or walked with them. Instead, we carried on and chalked it up as hiccup #1.

The fourth stop took us another 0.6 miles west to Barrio located at 15527 Madison. Barrio is one of my all-time favorites and admittedly, I have to get at least one of the same taco every time! I highly recommend the soft taco with braised beef, cheddar cheese, lettuce, jicama slaw, corn salsa, salsa roja, chipotle crema and barrio secret sauce (if you like it hot)...along with a skinny margarita :) You will thank me later. A standard taco at Barrio will cost you $3 apiece. 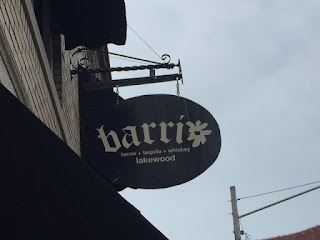 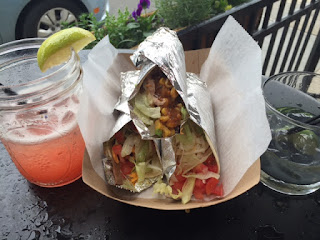 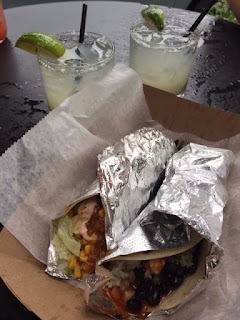 We had an extra special visit from baby JoJo (and Sean). 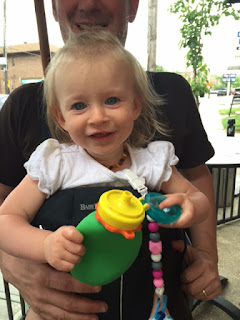 Next we headed 0.7 miles north to Chipotle located at 14881 Detroit. The tacos are always consistent and always delicious. We shared our taco trio with Nick Jones at $6.50 for three. Unfortunately, they were out of tequila so we settled for a couple of beers. 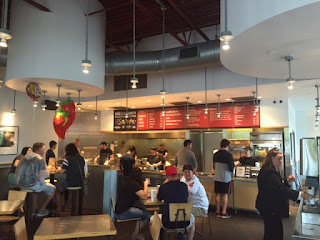 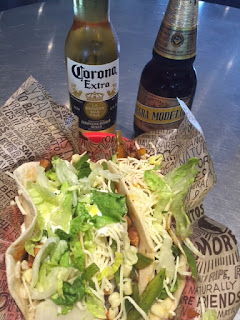 And now we have balloons... 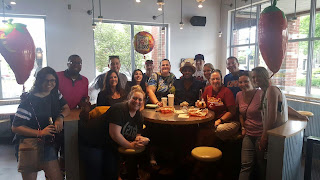 Another 0.2 miles west is good ol' Taco Bell located at 15500 Detroit. Steve and I had the Fiery Doritos Tacos Locos taco supreme (no tomato) and had a little fun playing Lady and the Tramp...Taco Bell Style. This bad boy set us back $1.89. 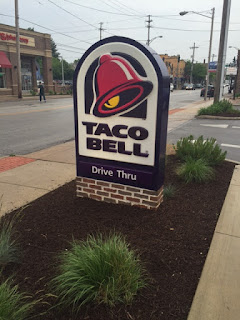 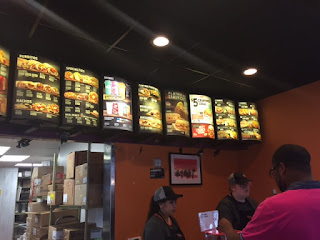 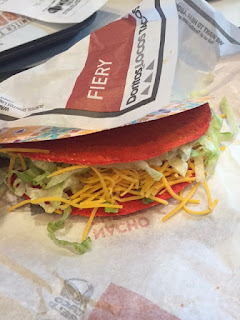 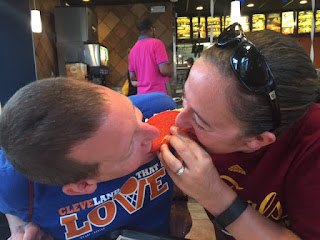 0.4 miles west on Detroit took us to Cozumel located at 16512 Detroit. This is where we approached hiccup #2 because they were just too packed. We didn't even ask to be seated and instead wandered across the street to Plank Road for a quick drink.

Another 0.6 miles west and we found ourselves at Kenilworth where we were too late for their Saturday tacos. Apparently they stopped serving them at 6 pm. Oh well. Hiccup #3 was under our belt!

Thankfully our eighth stop was only a block away. The Riverwood is located at 18500 Detroit and their crispy soft taco shell is a game-changer. Light and crispy with simple ground beef, cheese, sour cream and tomatoes is well worth the $3 price tag. 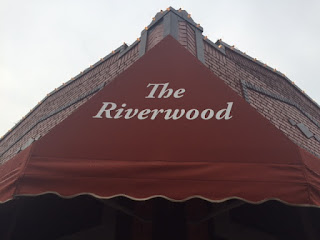 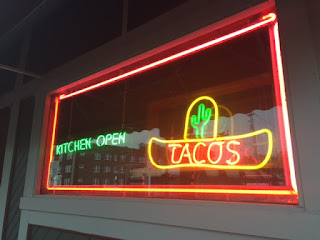 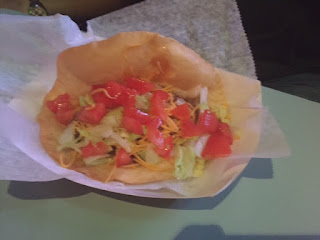 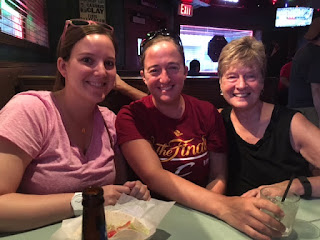 Next we headed 0.5 miles west into Rocky River where we encountered our final and 4th hiccup at Fresco Mexican. Located at 19310 Detroit, they were simply closed. 100% our fault as we arrived 1.5 hours after their posted hours. Oops.

Our eleventh stop was another 0.3 miles west in Rocky River at one of the newest and hippest taco establishments. Bomba Tacos and Rum is located at 19880 Detroit and offers a unique variety of tacos and delicious mojitos. Steve and I ordered the Chicken Tinga and Spicy Cauliflower tacos along with two mojitos. 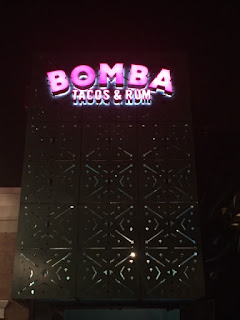 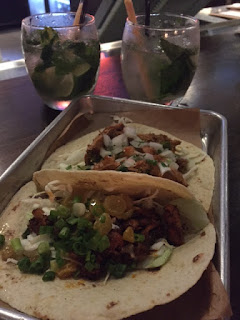 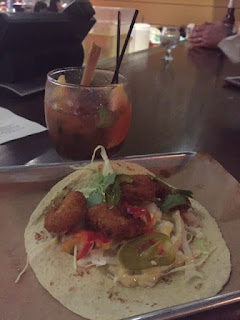 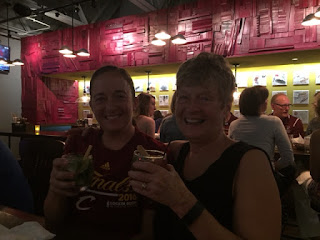 Our last stop was the Lakewood Village Tavern located at 13437 Madison. The LVT, which was not on my initial list (but a no-brainer) has easily become our go-to spot for late-night karaoke and Saturday's are their taco night! Mom and Rich drove us the 5.4 miles we had just walked and joined us for a few minutes while Steve enjoyed a beef taco for a whopping $1.75. 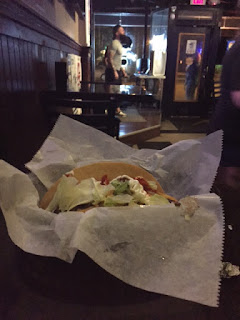 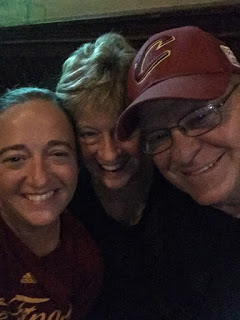 A few additional places that I highly recommend for tacos in Lakewood are El Carnicero (16918 Detroit Ave.) and Merry Arts (15607 Detroit Ave).


El Carnicero's menu isn't suitable for sharing in this setting, so we left it off the list, but it's arguably my favorite restaurant in Lakewood and could work well in a much larger group with chafing dishes. Merry Arts' famous Patty's tacos are only served Monday and Thursday when they're the only menu item available on those particular nights. They have an ultra crispy soft shell taco similar to the one found at Riverwood. 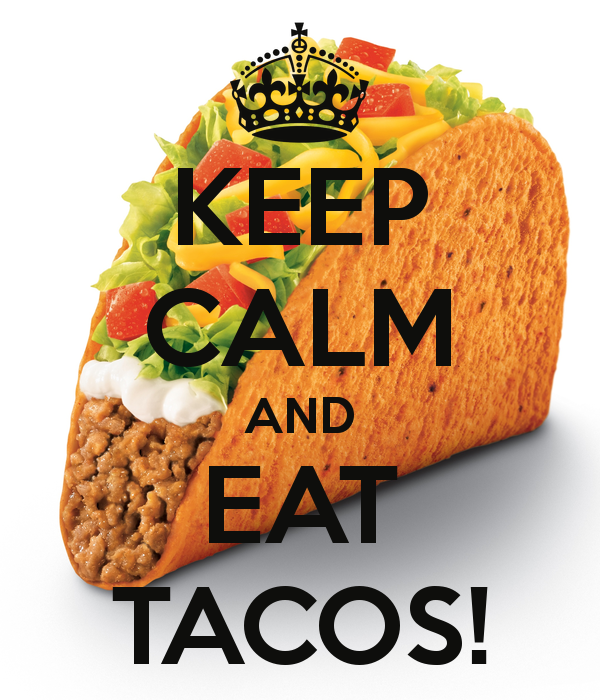