Well, we got what we asked for…we’re playing into June. 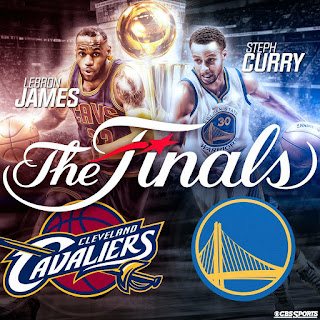 The NBA Finals are something special. The bright lights. The media. The fans. The NBA Finals are what dreams are made of and the 2015 Finals brings together the two best teams in the NBA comprised of the League MVP in Stephen Curry and the world’s best player in LeBron James. Whether it’s in 4 games or 7 games, one of these two players will lead their team to an NBA Championship.

On Monday afternoon, Steve was informed via email that Cavs team owner, Dan Gilbert, would be flying all full-time employees to either game one or two in Oakland. Steve had hopes, but no expectations for this trip as Dan Gilbert had flown them out to San Antonio during the 2007 NBA Finals. He had no expectations because a lot has changed in 7 years and the staff at The Q has grown dramatically since Gilbert acquired the Lake Erie Monsters, Cleveland Gladiators and Canton Charge during that time frame. With over 300 employees, there were a lot of logistics involved with these trips.

Here is Steve and the rest of IT staff with the Eastern Conference Champion trophy. 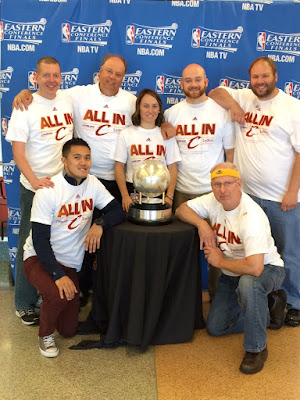 The excitement was overwhelming.

Steve arrived at the airport at 6:30 am with 180 fellow employees, including his IT teammates Erin and Eric, and boarded a charter flight. Steve wasn’t able to sleep during the over 4 ½ hour flight, but that’s not surprising. 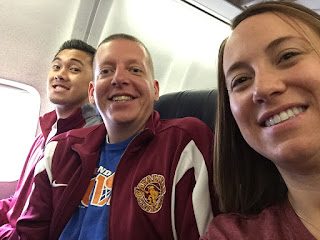 They arrived in Oakland around 10 am PT where they boarded buses to San Francisco’s Fisherman’s Wharf. Steve, Erin and Eric took in the scenery and enjoyed a few cocktails. 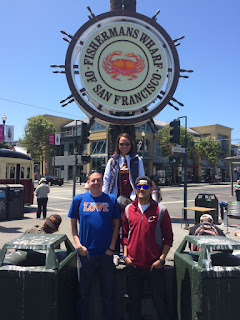 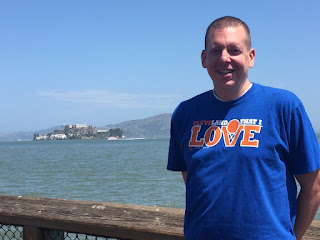 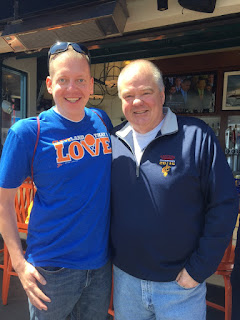 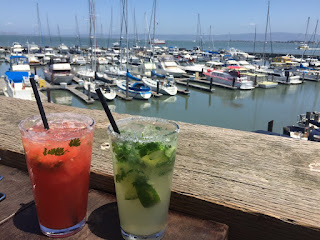 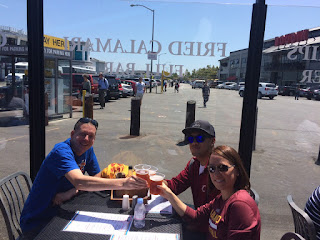 At 2 pm, they joined the rest of the Cavalier family for lunch at Bistro Boudin. They even provided them with drink tickets! 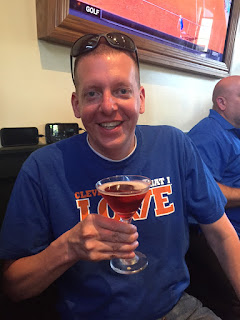 By 4 pm, it was time to depart for Oracle Arena. You’d think 2 hours would be enough time to arrive, but San Francisco traffic made it too close for comfort and they arrived just in time for tip-off. As you can kind of tell...Steve's seats were in the last row. We're not used to that view J 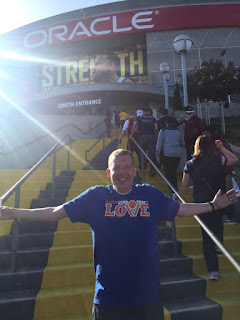 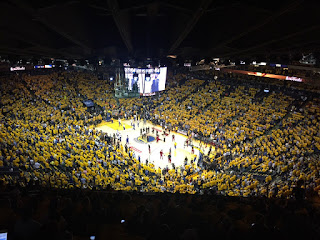 I tweeted some pictures to GV Art of Steve wearing their shirt at Oracle, so of course they had to post! 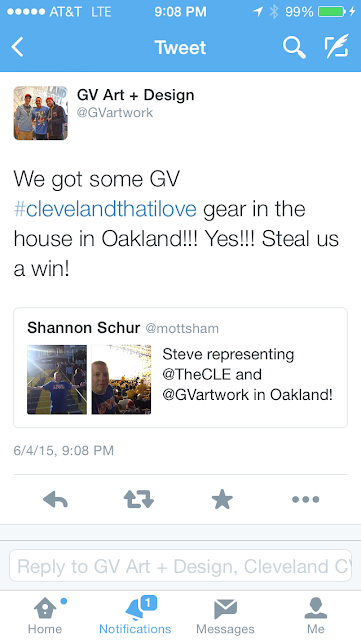 Fun fact: Oracle Arena was built in 1966. Sure, it’s been renovated, but seriously? Old is old. No wonder they’re moving to San Francisco. 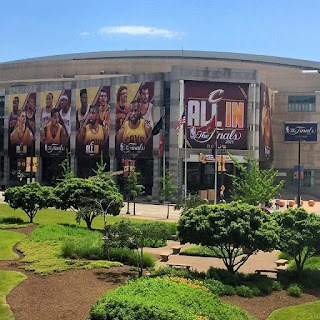 I had coordinated with Kevin and Sean to meet at the Winking Lizard Lakewood.  Kevin invited his friends Mitchell and Dempsey and I invited Cheri from work. Knowing the Lizard gets totally packed during these events, I walked down there at 7:30 to grab us a table. Our table of four became a table of six and we anxiously awaiting the 9 pm start. Even Jo Jo was exciting for the game! 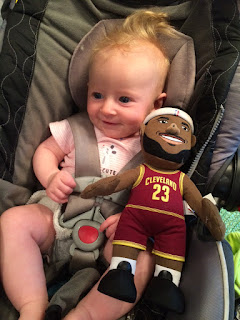 2,500 miles apart in Oakland and Cleveland. Still watching the same game in our same shirts to cheer on our beloved team. Go Cavs! 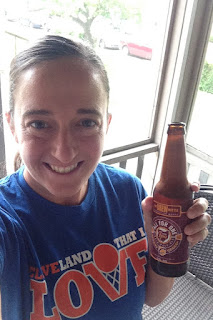 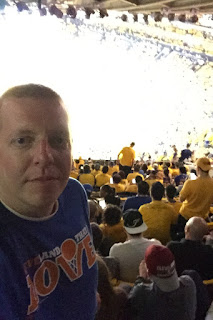 In one word, EXCITING. In another word, sad. 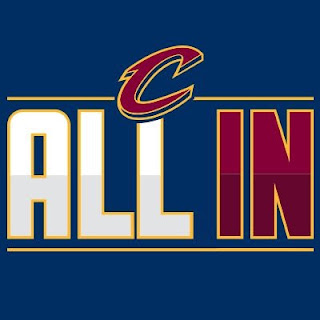 The Cavs started off strong and led by as many as 14 points with one minute left in the first quarter, but as expected, Golden State fought back and outscored Cleveland 29-22 in the second to enter halftime with Cleveland ahead 51-48. With 13 lead changes and 11 ties, the rest was anyone’s game. The Warriors took the third quarter scoring 25-22 and the game was tied 73-73 entering the fourth.

The 4th quarter went just like the rest of the game. With three lead changes and four ties, the game was intense. Cleveland only had three 4Q scorers with LeBron (11), Kyrie (8) and Mozgov (6) while Golden State was led by Klay Thompson’s 7 points, including 4-4 from the line.

With 2:38 left in the 4th, Golden State was up 96-93 after two made FT’s. LeBron responded with a dramatic three to tie the game at 96. The Cavs made a stop at the other end of the floor and took possession with 2:14 remaining. At this point in the game, the refs made a game-changing decision when they called a travel on Timofey Mozgov on a made basket that would have put the Cavs up by two. Sure, the Cavs could have responded on the next possession, but it was a call that should not have been made.
Curry put Golden State up by two and Mozgov responded with two made FT’s to tie the game at 98 with 39.1 seconds remaining.
We knew the ball was going into Curry’s hands and we were right. Steph Curry drove to the basket only to get BLOCKED by Kyrie Irving and give the Cavs possession. It was beautiful and the (Winking Lizard) crowd went nuts.
Tie game. Cavs ball. 24.1 seconds remaining. 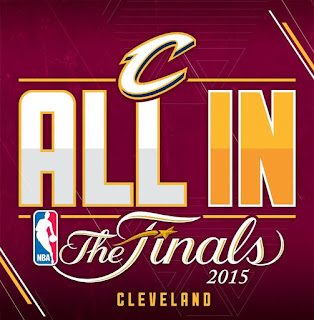 Nervous energy doesn’t even begin to describe the feeling. We assumed LeBron would take the last shot, but can never be sure. I can tell you that I WANTED LeBron to run the clock and take it hard to the hole. Lay it up. Take the foul. Something other than a long jumper.

Well, LeBron did not listen to my plea and the five-time MVP missed a long jumper with 3.8 seconds remaining. Iman Shumpert’s follow-up shot missed and this game was going into overtime.

That’s where the excitement ends. Overtime was disastrous. Despite a valiant effort during the first four quarters, Cleveland fell flat in OT. They missed their first eight shots and were outscored 10-2 to fall 108-100 in Game 1. After using the eight-day break to heal his ailing body, Kyrie looked like his usual self before limping off the court with what is now known as a season-ending left knee injury.

LeBron finished with 44 points, eight rebounds and six assists in 46 minutes in the highest scoring game of his Finals career. Kyrie had 23 points, seven rebounds, and six assists while Mozgof added 16 points for Cleveland. The rest of our usual energetic team was stagnant. Shumpert, Tristen, J.R. and Delly finished with 2, 6, 9 and 0 points respectively. 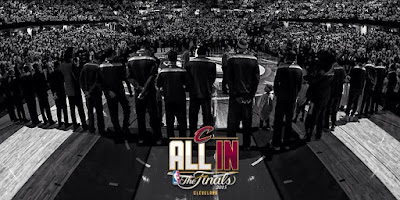 It took a lot of time for Steve to get out of the arena and to the bus and then their flight was delayed. While they were fed again prior to boarding their flight, when all was said and done, they touched down 8:22 and Steve arrived home at 9:00 am and headed into work at 1 pm. 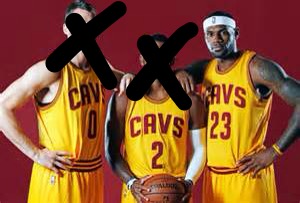 And the rest of our bobbleheads have stayed in the attic... 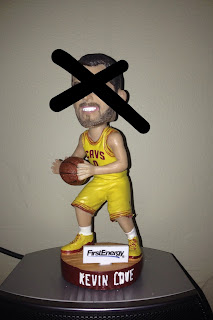 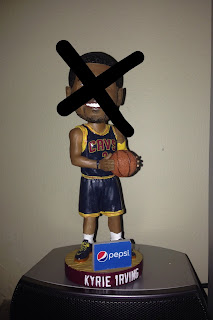 Steve’s trip to Oakland was an experience that he’ll always remember. Of course, we all would have preferred a Cavalier win, but we’ll just have to wait a few days. Game 2 is on Sunday in Oakland. Everyone needs to play the best basketball of their lives.