We had definitely been counting down the days until we left for Myrtle Beach. We usually make the 11+ hour drive, but I was able to find relatively inexpensive flights and a rental car into Wilmington, NC, so we chose to fly instead. Not only did it give us almost two additional days at the beach, but it made the anticipation of the trip even more exciting. 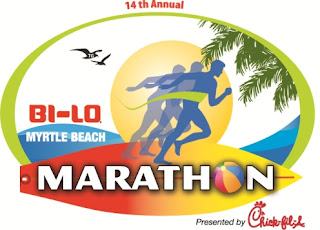 We arrived in Wilmington at 9:30 am on Thursday and made the easy one-hour drive to Myrtle Beach. We grabbed a bite to eat at Wild Wing Café, and then headed back to the condo at Kingston Plantation.

That evening we had martini’s at Zulu Lounge, following by dinner at Chuck’s Steakhouse, then a few more beverages at Backyard Sports Bar & Group Therapy. It was a long day and we slept very well!

We had some of the best weather on Friday with temperatures in the high 70’s. We took advantage and spent much of our time outdoors. Even though neither of us really loves to shop, we walked around Market Common and Tanger Outlets, both outdoor shopping areas, throughout most of the day. 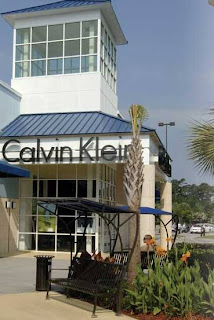 We stopped at Travinia in Market Common for lunch...

While also visiting the Runner’s Expo at the Convention Center where I picked up my race number and other goodies. 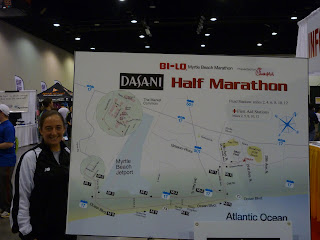 Steve thoroughly enjoyed the free beer being distributed by New South Brewing...for this reason alone, he has come to love these runner’s expo’s :) He even left the expo with a New South Brewing pint glass for our collection!

For dinner we went to Flying Fish for happy hour, then to California Dreaming and Chucks Steakhouse. We hit the sack early and I did my best to get a restful sleep.

On Saturday morning, we rose extra early because it was finally race day! A 6:30 start time meant we were up by 5 am with temperatures in the mid-50's. By race time it was about 62 with a slight breeze. The sun began to rise and it ended up being a beautiful day for a run! I was excited, but also nervous. 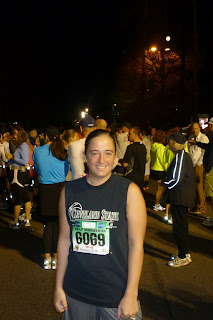 It was only six months earlier that I had returned from my femoral neck stress fracture. At this time last year, I was in my best running shape and ready to run the Myrtle Beach half marathon, until they cancelled it due to a little bit of snow. This is a picture of me from LAST YEAR!! Wow, what a difference... 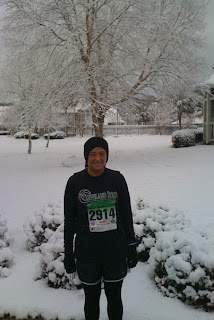 It wasn’t long before I got over my disappointment and ran a half in Columbus in late February 2010. Shortly thereafter, I was diagnosed with my hip injury. Let’s just say it’s been a long and slow process to train for this race. In the end, it was far from my best performance, mostly due to the frequent stops to stretch my hip as well as the 7+ minute wait at the port-a-potty. I also ran slower than I had hoped, so I guess that just leaves me room for improvement! I have signed up for the Cleveland half marathon on May 15 and expect to run a few smaller races before then...I have 12 weeks to prepare, so I'm sure I'll be ready! 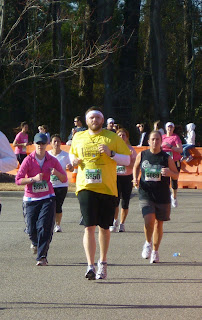 After the race we watched the half marathon awards ceremony and enjoyed a few snacks and free beer (yes, Steve and I love any free beer). It’s fascinating for me to see how the winners of these races finish. In 14 years of the Myrtle Beach Marathon, a female won the full marathon for the first time. The 39-year-old finished in 2:40:11. Awesome and unbelievable. 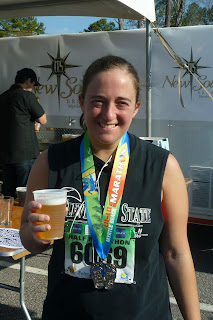 Next we were on a mission to redeem as many free beverages as possible. Many area restaurants had coupons for runners. They varied greatly from 10% off to free appetizers, etc., but we were most interested in the free cocktails! First we headed to Gordon Biersch at Market Common…they didn’t open until 11 am, so we waited around until about 11:01 :) I enjoyed my free beer, while Steve enjoyed his not-free beer. 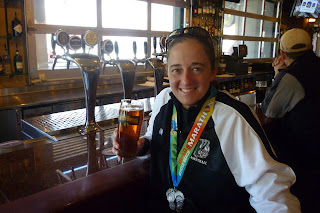 After a short nap, we took a stroll on the beach and then went to a post-race party at the House of Blues. There was free entry for all runners, but Steve had to pay his way. There was a lot of carb-heavy food, live music and more free beer (surprised?) It was a little too crowded for our tastes so we ventured across the parking lot to the Flying Fish for the second night in a row. It was an exhausting day, so after a couple of appetizers, we decided to head back to the condo and watch the NBA All-Star festivities before calling it a night.
On Sunday, I was up early enough to see the sun rise. That doesn’t happen very often, so I took a picture so Steve could see it too :) 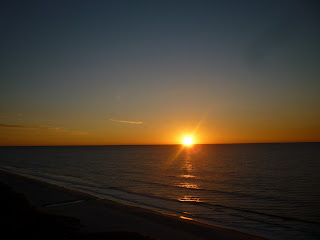 That morning, we feasted on brunch at Chestnut Hill...

...before walking to Backyard Sports Bar to watch Cleveland State take on Old Dominion in their BracketBusters game at 1 pm. Knowing that the Daytona 500 was scheduled for 1:30 pm, we planned to arrive early to ensure a decent TV and seat location. I was glad we did!! NASCAR fans slowly filtered in and soon enough, 34 of 35 TV’s had NASCAR on them…the one remaining TV was CSU on ESPN2.

Despite the tough loss, CSU’s Norris Cole received some great national coverage and scored a BracketBusters record 35 points. Following his previous 41 points, 20 rebounds and 9 assists (at 6’1!!) performance, he is currently being considered one of the hottest players in the country. Let’s hope that continues through the next several weeks! 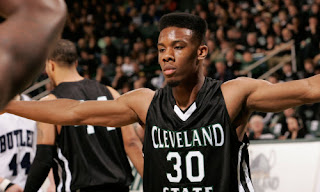 On Monday we ate at The Office Italian Workplace for lunch. We had some really fantastic pizza and then took another long walk on the beach. Those walks never seem to get old... 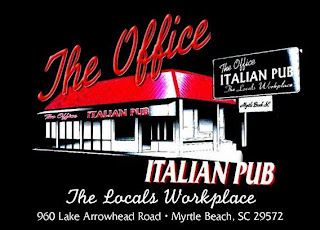 We had amazing weather throughout the entire trip so we did our best to soak in the sun whenever possible. 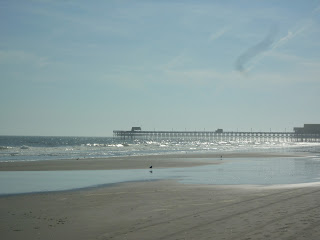 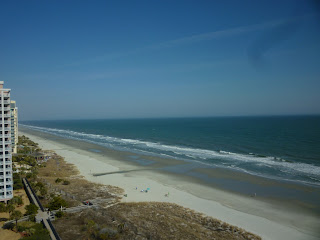 That night we had our third dinner (happy hour, of course) at the Flying Fish. Their food is really tasty and their food & drink specials are hard to pass up (we’ve made that pretty clear!)

Tuesday was the last day of our trip and we decided to try something different. Since our flight left out of Wilmington, NC, we chose to spend the day in their historic downtown area. 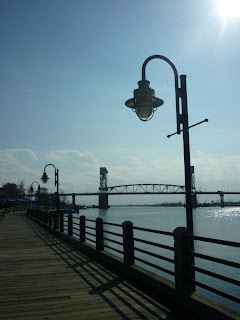 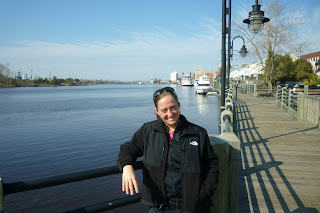 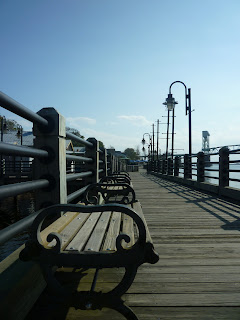 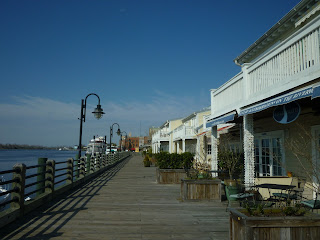 We visited a few places including Front Street Brewery, 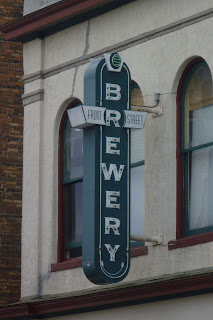 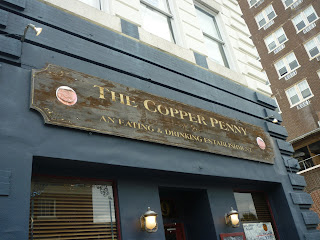 Elijah's for a bowl of clam chowder and bloody Mary's, 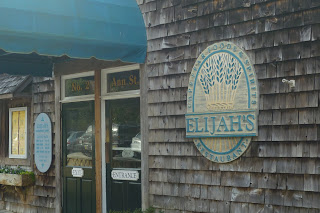 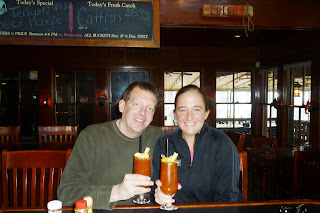 Before finally deciding on a late lunch at The Basics. I enjoyed an authentic Carolina BBQ sandwich, while Steve had an oyster po-boy. 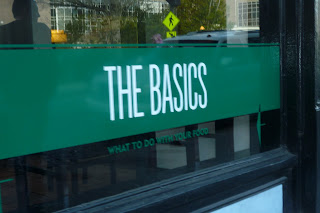 For dessert, we indulged in a Coca-Cola cake, which consisted of a moist chocolate cake (assuming because it was baked with Coca-Cola), topped with a pecan frosting and served with vanilla ice cream. Yum. 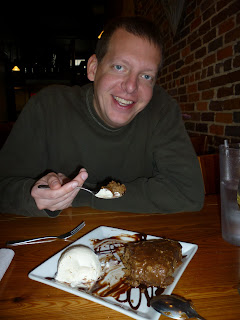 Although we had flight complications, they re-routed us through Charlotte and we ended up arriving home an hour earlier…I hate it say it, but flight delays never seem to work out, but this time they actually did! Sean & Alex picked us up at the airport and they nicely pointed out the unbelieveable number of icicles on the trees. Apparently a huge ice storm had come through Cleveland while we were gone and several people had been without electricity for a few days. I’m glad we weren’t there for that!
Up ahead, Steve and I will be totally comsumed with basketball over the next 5-6 weeks...With the Horizon League Tournament and NCAA Tournament fast approaching, you can bet that Steve and I will be either working or watching basketball from now until April 5th…If you can believe it, we’re actually a lot more basketball busy than usual!

In terms of basketball business, the CSU men are currently in first place in the Horizon League (they have two more games to be played this week) with the potential to host the HL tournament (March 5-8). The women are currently in 4th place and (as usual) #14/17 Green Bay has dominated the league with an overall record of 25-1, having locked in their hosting of the women’s tournament (March 9-13).

Stephen has work responsibilities during the MAC Tournament (March 10-12) as well as 12 Cavalier home games during this 5-week stretch. To add to the basketball madness, Cleveland State is hosting the first and second rounds of the men’s NCAA Tournament, with games being played at Quicken Loans Arena. Since the games are being played at The Q, Steve has to work all of them (which makes him VERY unhappy), while I purchased my ticket over a year ago and will be going with my brother Sean. Of course, our plans could become a bit more complicated if Cleveland State wins the Horizon League Tournament…but I'm not going to get ahead of myself.
Finally, Steve and I will be attending the men’s Final Four in Houston, TX (March 31-April 5)!! Steve’s parents were able to get tickets through the lottery and know how passionate we are about our college basketball...so we are the perfect recipients and always appreciate their generosity :) Over the past two years, we have also attended the games in Detroit and Indianapolis and have had an amazing time. We don’t doubt that this year will be any different! We’ve had our flight and hotel reservations for months and are really looking forward to the six-day trip in much warmer weather.

Until then...I will be craving the sun that I so dearly miss.
Posted by Shannon at 4:56 PM