Over a 6 day stretch, Steve and I watched 6 basketball games played by 5 different teams in 4 cities in 3 states. We covered 890 miles, visited my college stomping grounds and caught up with some old friends. We wanted to use this opportunity to see some friends that have moved away, visit old and new places, and watch some (hopefully) good basketball; all while spending quality time together. Now that it’s over, I can honestly say that we accomplished all of this and continued to make more memories. 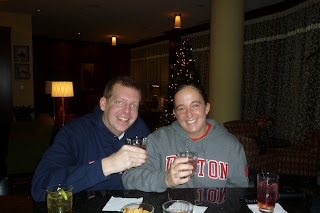 The tour began in Cleveland on Tuesday night, where I watched the Cleveland State women defeat Lake Erie 81-62. About a 1/2 mile away, Steve was working the Cavs game and saw the disappointing Cavaliers fall to the Orlando Magic 110-95. Steve argues that the Cavs game shouldn’t count against his record since he wasn’t there as a spectator. Since it was a loss, I’ll let him have his way and call it a 1-0 night.

On Wednesday afternoon we headed three hours southwest to Dayton, Ohio to see the Dayton men face off against George Mason. Before the game, we visited a restaurant that I frequented as a student. Much has changed since I graduated from Dayton 10 years ago (yes, it's been 10 years!), but Milano’s remains. It’s about five times bigger and a whole lot nicer, but still a pregame hang out with good food and drinks. 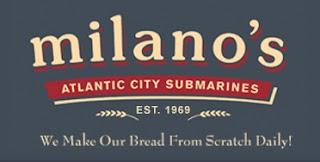 As a Dayton alumni and Flyer Faithful, I have always enjoyed watching games at UD Arena. I might be a little biased, but my thoughts were justified when I brought Steve to a Dayton vs. Xavier game six years ago. He marked it as one of the best venues with the best atmosphere he had ever watched a college game. The Dayton men have always drawn well, leading the Atlantic-10 in attendance and ranking in the Top 30 in the country for 14 straight years. 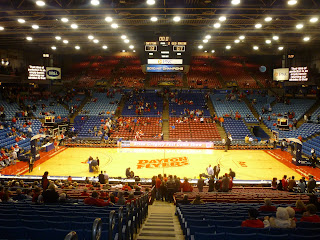 The George Mason game was no different. Despite the winter break and fewer students, the game was sold out with an overall attendance of 13,371. The Flyers didn’t disappoint and pulled-out a 73-67 victory. 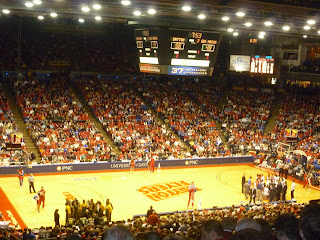 On Thursday we roamed around campus and I showed Steve (again) the different places I lived and played at during my youth. I also showed him the scary and not-so-scary places that I lived. 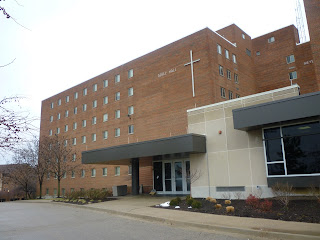 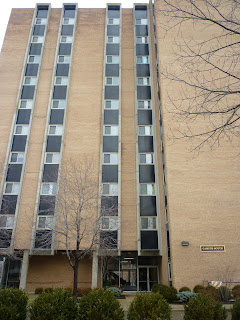 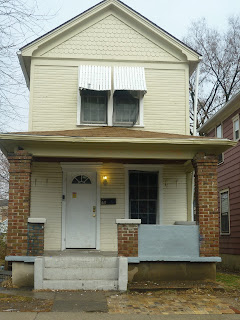 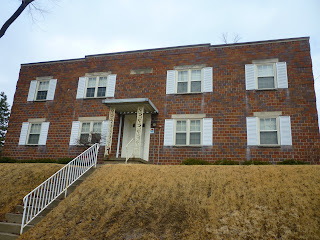 Senior Year ~ 739 Irving.
Coincidentally, we had met up with some of my college roommates on Monday night in Cleveland. Some of us still live in the area, while Brigid (San Francisco) and Sarah (Las Vegas) were travelling from out of town. It’s been a while, but it was really great to see them. 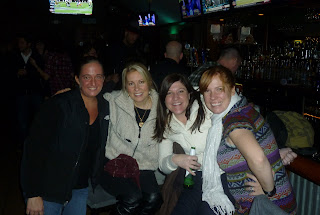 We also visited the bookstore, ate lunch, napped and then headed back to UD Arena to watch the Dayton women play Harvard. The Flyers dominated from start to finish, winning 101-80. The Crimson sure could have used Allison Feaster for this one! 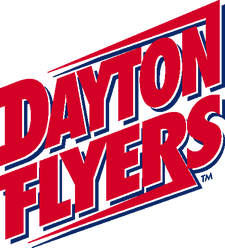 What makes our visit to Dayton extra special is that I have not one, but two friends on the women’s basketball staff. Coaches Kyle Rechlicz and Angie Russell both worked with me at Cleveland State and we’ve done our best to keep in touch since they’ve left. Because of them, Dayton was a must stop on the SMS Basketball Tour. 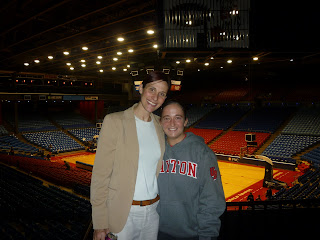 We sat with Kyle’s husband Dave at the game. As always, it was great to see him and their daughter Payton. 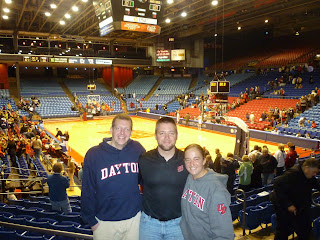 After the game, Steve, Kyle, Angie and I met at BW3 where we enjoyed a few beverages and caught up on what’s been going on in each other’s lives. It was a good time and Angie even finished her beer before me! If you know my Smirnoff drinking friend, then you know this is a big deal :) 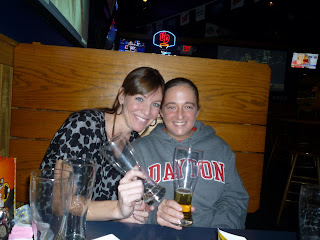 On New Year’s Eve, we headed two hours west to Indianapolis, Indiana. After lunch at Rockbottom Brewery, we went to the IUPUI campus to see the Jaguars face-off against Western Illinois. Our friend Britt Korth is in her first year as an assistant coach at Indiana University Purdue University at Indianapolis (that’s really the name, thus the acronym IUPUI). As a player for four years and a graduate assistant for two years at Cleveland State, I guess you can say I’ve known Britt for a while. Anyway, when she got this job, Steve and I promised we’d make the trek and deemed New Year’s Eve totally appropriate. Our friend Lia joined us at the game as well as Britt’s parents, sister and brother-in-law. Unfortunately, the Jaguars dropped a close one losing 51-50.

That night we went to an area north of Indianapolis called Broad Ripple where they have a bunch of bars and restaurants. We visited a few different venues before we found the cheapest where we stayed to ring in the New Year! 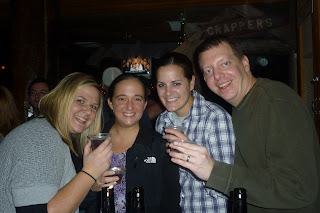 On New Year’s Day, we headed to our final stop on the tour located 2 1/2 hours north. Chicago, Illinois is where we planned on seeing two games…Cavaliers vs. Bulls and Cleveland State women vs. Loyola. During the drive, we decided to skip the Cavs game and instead spend time in the city and eat a nice dinner together. Considering we have seen our fair share of Cavs games and rarely get to visit a city like Chicago, we knew we weren’t missing much.
We stayed at the Hotel Palomar located on State Street and near the Cleveland State team hotel. It’s a new boutique hotel in the River North area of Chicago. It was one of the top-rated Chicago hotels on TripAdvisor, so I was optimistic about the choice. It was probably one of the nicest hotels we've stayed in...very chic and modern and in an ideal location. They had hot chocolate available throughout the day as well as a complimentary wine and hot toddy reception at night. I had debated between several hotels and was really happy with my decision, especially since I got a great rate! 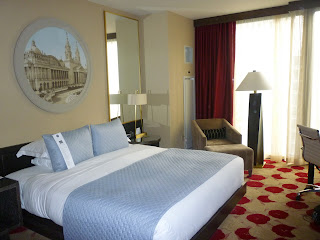 With so many restaurant options available, we asked the hotel concierge for a nearby recommendation and we ended up at La Madia, a contemporary Italian restaurant about two blocks away. We ordered roasted whole artichokes as an appetizer, gnocchi with sausage and spinach along with a goat cheese pizza as our entrees and espresso semifreddo for dessert. We were very happy with our decision, but were particularly impressed with the fresh gnocchi and delicious drinks! 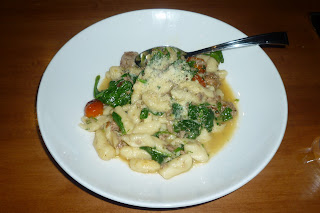 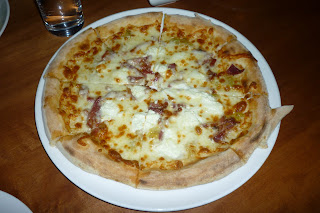 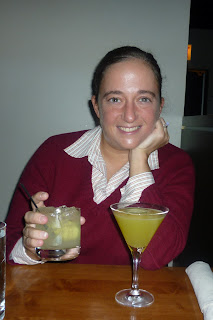 Despite their renowned wine list, Steve and I opted for the Moscow Mule & Citrine to drink.
After dinner, we met up with two of my co-workers. Bernard was celebrating his birthday and Greg was simply along for the ride (do you blame him?) While we may have kept Bernard out a little later than recommended, we figured your birthday only happens once a year and always a reason to celebrate! 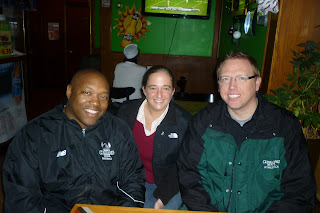 Sunday morning we enjoyed a continental breakfast at the hotel and then headed to Loyola University to see the Vikings take on the Loyola Ramblers. With one of the best efforts we’ve seen from them this year (and we are their super fans!) Cleveland State dominated every aspect of the game and ran away with a 76-58 victory. 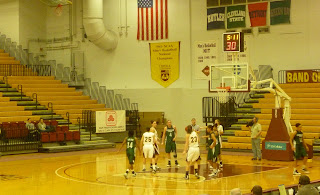 It was a very satisfying end to our trip and we were happy to finish with a 4-1 record.
We left for home immediately after the game wishing we could have spent more time in Chicago. The Windy City did not dissappoint! It’s such a great place with so much to see and appreciate only 5 ½ hours from Cleveland. I guess that’s reason enough to return! 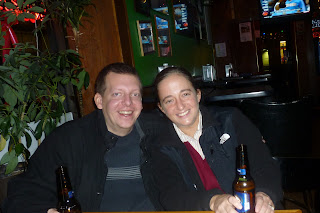 We were both battling with coughs and colds throughout the entire trip so we slept a lot more than usual and always had some DayQuil or NyQuil by our side, but you can bet that it definitely didn’t keep us from having a good time. As usual, Steve and I really enjoyed and appreciated our time together. We always have another adventure on the horizon and this was just another one for the books. Myrtle Beach in February is up next where I will run the half marathon (pending any weather issues!!) and we’ll visit some of our favorite places…Until then, have an awesome start to 2011 and learn to love and laugh more often.
Posted by Shannon at 11:49 AM