I love having a birthday celebration go on for days and Steve’s 37th birthday would be no different. Due to a Cavs game on Monday, we had to get the party started on Tuesday, so we headed to Players with Sean & Alex and let the celebrating begin!

It’s become tradition for all of us to go to Players to celebrate anything so after some martinis, wine, appetizers, pizza and dessert we were joined by my mom and Rich before heading home.

Wednesday was another fun-filled day as Stephen and I headed to Five Guys in Lakewood for his birthday lunch. Delicious.

For dinner we went to Crocker Park to partake in some happy hour specials at Hyde Park where we enjoyed some fabulous martinis (the grapefruit martini was awesome) and appetizers before heading to the movie theatre to see Avatar in 3D.

Thursday was Steve’s ACTUAL birthday and he chose Pepper’s Restaurant for dinner…it’s a tiny “mom & pop” Italian restaurant in Lakewood that we’ve been eating at since we started dating almost 9 years ago! Every time we leave there, we wonder why we don’t come back more often…

Following dinner, we were met at our house by Sean, Alex, Mom & Rich. We sang Happy Birthday, ate some ice cream cake and drank some chocolate caramel martinis. Yum! 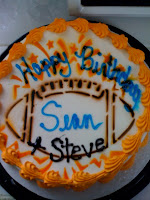 This isn't the first time this has happened. Sean gets a Dairy Queen ice cream cake for his birthday EVERY year (he is so spoiled), but on more than one occasion, we haven't gotten around to actually eating his cake so we eat it on Steve's birthday. I guess it's because it's next in the line of birthday's. Not only is football season over, but Sean's birthday was on January 28th! Oh well, it still tasted delicious and I thought I did a pretty good job of writing Steve's name on it :) There is still half of it left and Rich's birthday is March 16th...We'll see if we can make it last. 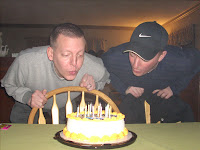 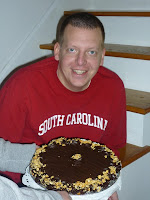 As if the celebrating hadn't gone on long enough! While in Connecticut for the weekend, Stephen's parents presented him with this decadent chocolate and peanut butter pie in honor of his birthday. We sang "Happy Birthday" and then happily indulged!