I am a solo runner and I don’t want to talk, so if you ever happen to go on a run with me, please don’t expect a conversation :) In addition to accessibility, solitude is my favorite part of running. What I also love is that it’s never about first place. I think it’s pretty amazing that winning a race is never an option and 99% of runners will never win, yet we keep on going. I’m a competitor, trust me, but I’m also a realist. If I ran to win, then I would have already quit. I don’t have the genetic or physiological make-up to be an elite runner (no offense mom & dad). Instead, I have the drive, desire and compulsion to be an adequate long distance runner. I don’t run for first place. Instead, I run for personal satisfaction and pride. I sign up for these races so I have the motivation to run each scheduled distance during my training, log it, and then check off another goal met. Let’s move on to my first race of 2010…

On February 28th, Stephen and I drove to Dublin, OH so that I could run the "Last Chance for Boston" half marathon. The race is given this name because when it started in 2000, the Boston marathon operated on a “qualify by a certain date” requirement and this event was held as close to that date as possible. A few years ago, Boston switched to a maximum registration limit, but the Dublin race committee liked the name of their little race, so they decided to keep it.

Anyway, we began the 2+ hour drive following the CSU men’s and women’s games on Saturday afternoon and it snowed the ENTIRE drive down. I had to keep reminding myself that I was in Ohio and not South Carolina and a foot of snow was not going to keep the race from being held. I was right :) When we woke up the next morning, the roads were clear and it had stopped snowing. The race was on as scheduled! 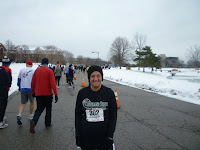 Overall, it was a fairly small race with less than 700 runners in five different races (marathon, half marathon, relay, 10K and 5K). The course was interesting…I guess that’s what you can call it. It’s a simple one-mile loop that I ran 13 times (+0.1 miles). I didn’t mind it since I’m okay with repetition and it also allowed me to see Steve 14 times throughout the race! He was very brave and stood out in the cold for the entire 2:17:53 that it took for me to run. It was a very cold day with temperatures under 30 degrees. It was impossible for me to keep my hands warm, but otherwise it wasn’t too unbearable. It was a great race and I bettered my previous half marathon time by 15 minutes. 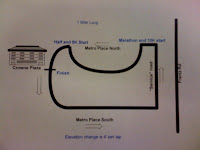 Following the disappointment in Myrtle Beach, I was happy to find a race near home that I could run instead. I was hoping to use the MB race to qualify for the D.C. half marathon in March, but have instead used my “Last Chance” time…I guess I can call it my “Last Chance for D.C.” I have set high goals for myself in 2010 and running these races will put me in a position to reach those goals.