On July 12th, Jenny and I flew from Tampa to Charlotte where Steve met us at the airport with open arms : ) From there, we drove 4 hours to Myrtle Beach, SC. We love Myrtle Beach and look forward to visiting every year. We were joined by Steve's mom and dad and older sister this year. While Stephen, Jenny and I stayed in Windsor Court, Paul, Sue and Gretchen stayed in South Hampton. We don't get to see them often enough so it was really nice to spend time with them. While I don't typically enjoy the Atlantic Ocean waves, Gretchen gave them a beating (or was it the other way around?) Stephen and I enjoyed watching her from our beach chairs as we sipped on a cocktail and listened to the waves. What a life! We also celebrated our 2-year anniversary while we were there. It's hard to believe it's already been 2 years! We have so much fun together : ) Myrtle Beach and Kingston Plantation mean so much to Steve and I. In addition to our annual vacation, we took our first vacation together there, got engaged there, got married there, honeymooned there, celebrated our first anniversary and now second anniversary there. Wow! Thanks Paul/Dad & Sue/Mom! It's so nice to have the opportunity to visit our wedding site and reminisce about the incredible time we had back in July 2006 while making new memories at the same time. Here are a few pics of us on the North Lawn of the Hilton, the same place we got married... 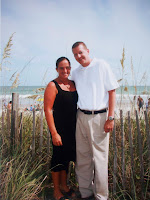 Every time we visit Myrtle Beach, we head to the same places...Finn McCool's for Irish beer drops, Cali Bakers and Ocean Annie's for karaoke, The Office Italian Workplace for Locals for pizza, River City Cafe for burgers, California Dreaming for wings and salad (and more!)...I guess you can say that once we find something we like, we stick with it. Last year, we tried one of those all you can eat crab buffets with Jon, Karen & Andrew. I think Andrew and Jon got their money's worth as they devoured crab leg after crab leg. Myself...not so much. I would come back to the table with 2 french fries and a chicken finger. I did win the prize for the most plates used. That has to count for something! This year we stumbled across a new restaurant called Malibu Cantina Tex-Mex. Cheap drinks, great Mexican food and free pool. It was quite a find. Hopefully it'll be there next year! Anyway, here we are at Finn McCool's with our only beer drop of the week. It's tradition! 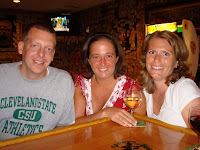 Now on to golf!! Within the past year, Steve and I have become more comfortable with our golf games so we try to find as many opportunities to golf whenever we have the time (and money!) This year, we finally had the opportunity to play some golf while in Myrtle Beach! We played 2 great courses. After we dropped Jenny off at the airport, we headed to Myrtlewood Golf Course where we were paired with a father/son from Avon Lake, OH ~ a town just 20 minutes from us in Cleveland. What a small world! We both played pretty well and couldn't wait to play again... 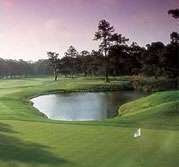 On Friday, we woke up early and headed to Meadowlands Golf Course in Calabash, NC. I chose this course because it's actually rated as one of the top 100 courses for women to play in the country. Although neither of us played as well, I still beat Steve by one stroke! It must of have been the tee placement. On one hole, I had a 98 yard advantage!