We visited a few sites while in the Boston area including the USS Constitution. Launched on October 21, 1797, "Old Ironsides" is the oldest commissioned vessel afloat in the world. A remarkably thick hull incorporating Live Oak, a substance unique to America at the time, contributed to "Old Ironsides" cumulative 33-0 battle record. This ship continues to be crewed, maintained and operated by the U.S. Navy. 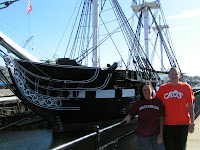 After a quick walk on the ship, we headed over to the Warren Tavern for a drink and some lunch. Established in 1780, the Warren Tavern is one of the most historic watering holes in America. This oldest tavern in Massachusetts was visited by many famous individuals, including Paul Revere and George Washington. 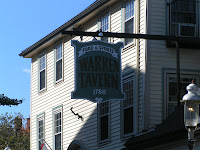 Just a few blocks away on the Freedom Trail we visited the Bunker Hill Monument. The Monument was build to commemorate the Battle of Bunker Hill, the first major conflict between British and Patriot forces in the Revolutionary War, fought there on June 17, 1775. The 221 foot granite obelisk was erected between 1827 and 1843 in Charlestown, Massachusetts. 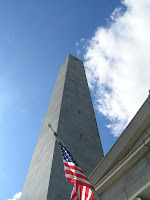 We climbed the 294 steps to the top and although it was a little bit of a task, the view of the city was fantastic. 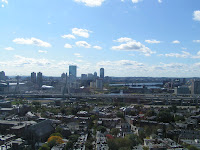