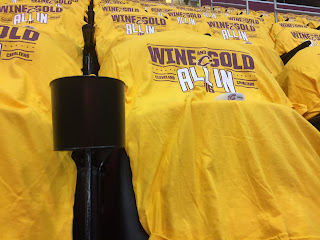 Kevin and I joined another sell-out crowd of 20,562 to watch the Cavs take on the Atlanta Hawks in the Eastern Conference Semi-Finals. After a clean sweep of the Pistons, I had a good feeling going into this series. Cleveland swept Atlanta in last year's Eastern Conference finals and had won seven straight over the Hawks. 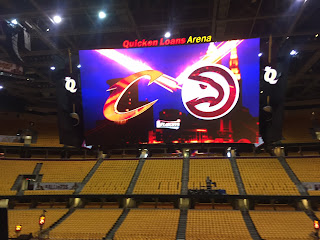 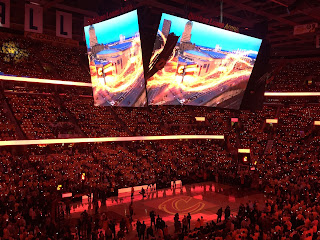 The Cavs outscored Atlanta 30-19 in the first quarter led by Kyrie Irving's 10 points. Despite consistent shooting by the Cavs - 44.4% FG and 42.9% from three - the Hawks remained competitive and entered halftime with the Cavs up 51-41. 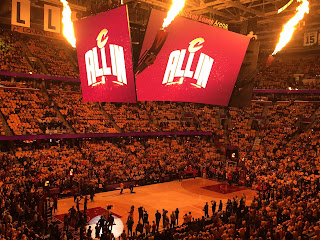 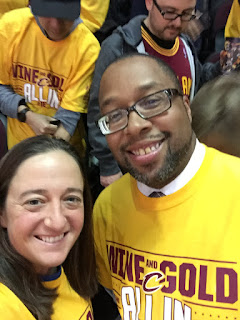 The Cavs came out strong in the second half and seemed intent on knocking out the Hawks. Despite Kevin Love missing six of his first seven threes, he was able to knock down a pair from long range followed by a dunk from LeBron James, giving Cleveland a 72-54 lead with 4 minutes left in the third. Kevin and I were standing in line for a beer during the final minutes of the quarter when Atlanta went on a 16-3 run to close the quarter and pull within 75-70 entering the fourth.

James converted a critical three-point play with 2:09 left in the game after the Cavs blew an 18-point lead. They had fallen behind (79-80) with 8 minutes left in the game before making several clutch plays down the stretch. 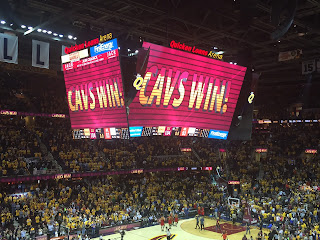 James scored 25 points while Kyrie and Kevin added 21 and 17. Cleveland withstood a strong second-half surge by Atlanta to come away with a 104-93 victory. 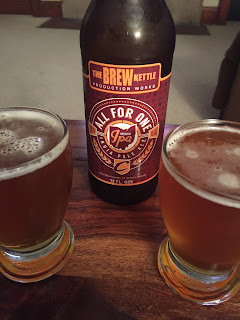 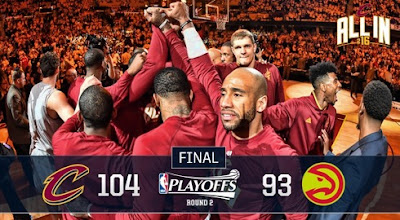 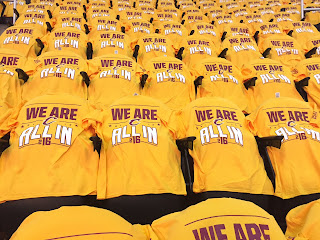 Game two was one of the most fun games I've ever seen. The Cavs hit an NBA record 25 threes, which is the most in any regular season or playoff game. 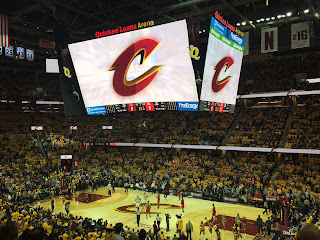 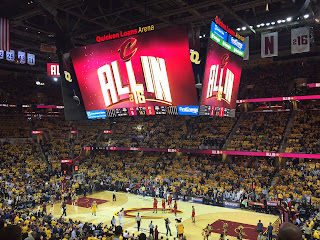 J.R. Smith made seven of those threes, but he was not alone. The Cavs went 25-45 from behind the arc and TEN Cavaliers hit at least one three during the course of the game. The Cavs were able to bench all of their starters for the entire fourth quarter, so it was Dahntay Jones off the bench who hit the record-setting three.

LeBron hit four threes in his 27 point performance, while Kyrie and Kevin went 4-5 and 3-4 from behind the arc. 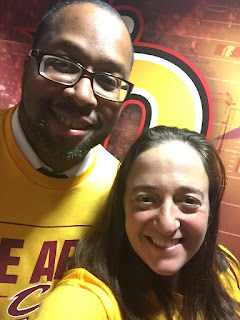 Cleveland made 18 threes in the first half and held an astounding 74-38 lead. They added seven more threes after halftime and ran away with a 123-98 win. 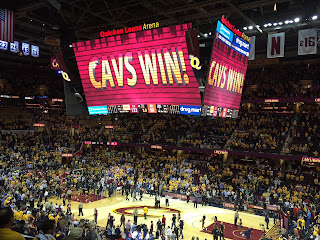 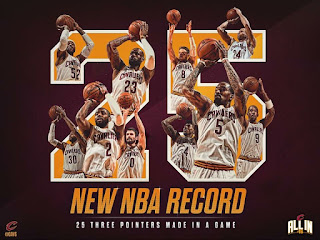 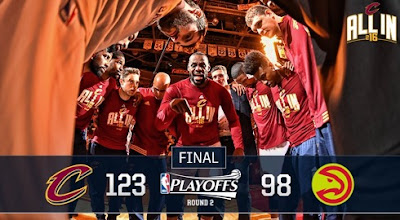 Kevin and Lisa joined us at our house to watch game three. Once again, we refused to deviate from our traditional "road game" dinner fare. Don't mess with tradition! 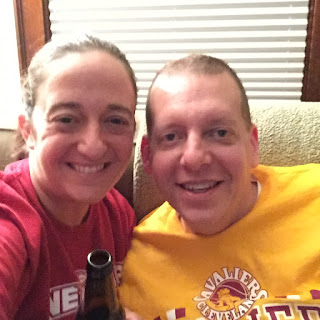 LeBron James and Kyrie Irving had their usual stellar performances and Kevin Love wasn't too shabby either. The trio combined for 69 points, but it was Channing Frye who was the star of the game. Frye scored 27 points and shot 10-13 from the field, including 7-9 from three.

The Cavaliers outrebounded the Hawks by a staggering 55-28 margin with contributions from Love (15), James (13) and Thompson (13). 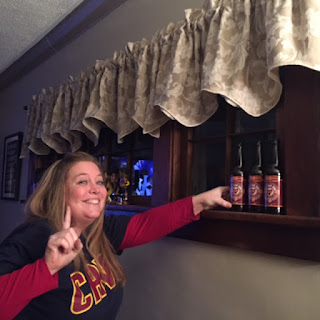 Two nights after setting an NBA record with 25 threes, the Cavs shot an awesome 21-39 from behind the arc. They dominated down the stretch and took home the 121-108 victory and a commanding 3-0 lead in the Eastern Conference Semi-Finals. 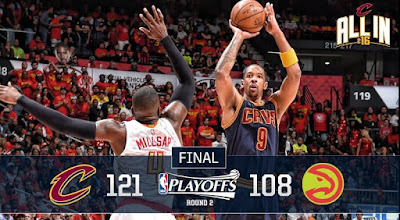 During game four, I had the luxury of being in Playa del Carmen, Mexico with my mom and sister (blog is coming soon!) It's a trip I planned to celebrate my mom's retirement, 70th birthday and Mother's Day. We enjoyed an incredible week at Ocean Maya Royale and I had no idea what the Cavs schedule would entail. Trust me, it didn't matter!

Tracy woke up first and reserved our pool chairs. I wasn't far behind to add this extra special detail...Cavs playoff t-shirts :) 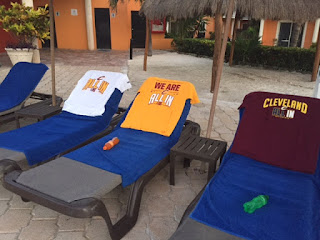 We started the day with breakfast at the Privilege Lounge and I followed it with a drink by the pool in my #ALLIN216 cup. 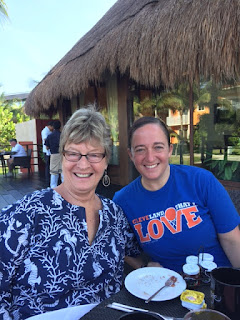 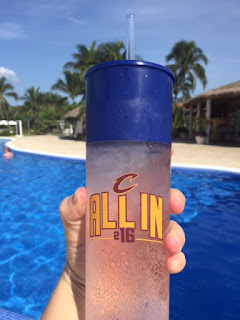 When it came time for the game to start, I had talked to the right people and they assured me they'd be able to show the game in a private theater. After about 30 minutes of checking every channel...we came to the conclusion we'd just have to receive updates via text.

Mom and I returned to the Privilege Lounge for some tapas and champagne while Steve kept me posted via text. 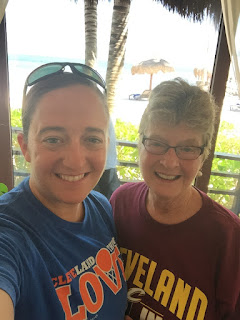 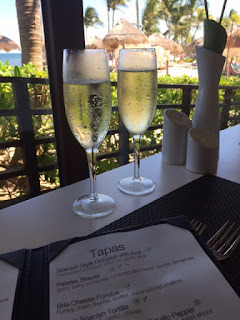 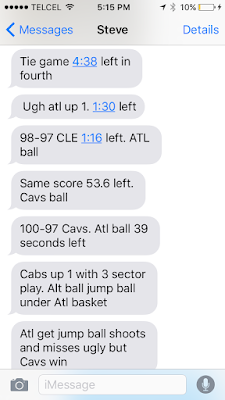 Steve watched the game at home with Kevin and Lisa and they enjoyed a celebratory All For One. 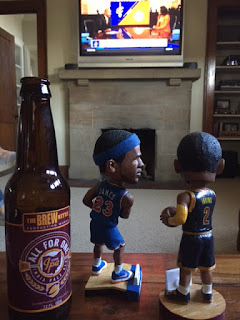 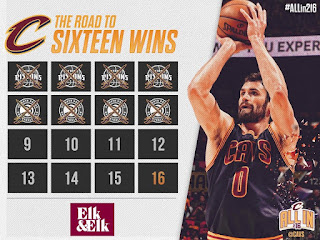 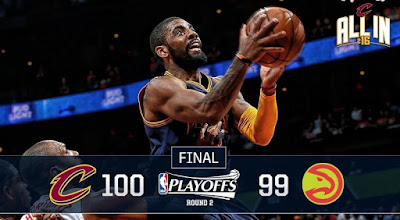 Bring on the Raptors!
Posted by Shannon at 9:58 PM