On Saturday, August 20th, Steve and I embarked on a trek around Lakewood in search of the best wings. We were not alone as more than 800 fellow Clevelanders joined in the fun at the 6th annual Lakewood Wing Crawl.

Organized by the Pillars of Lakewood young professionals club, participants walked or were shuttled around the city to enjoy four wings (2 buffalo and 2 specialty) at each of the 11 locations that spanned 1.5 miles along Detroit Road. Participating bars were Around the Corner, Harry Buffalo, Riverwood Café, Avenue Tap House/Guy's Pizza, Eddy and Iggy's, Pug Mahone's, Geppetto's, Midtown Booths Tavern, Plank Road Tavern, Merry Arts and Deagan's Kitchen & Bar.
We taste-testing wings at each eatery, voted on our favorite, while enjoying drink specials too. The cost was only $15 for all 44 wings! We’re smart enough to know we can’t each eat 44 wings, while also drinking at each establishment…so as suggested by the Wing Crawl organizers, we split and had 22 wings apiece!
Beginning on the West end of Lakewood, our first stop was Around the Corner where we enjoyed their amazing Black Pepper wings along with their Medium Buffalo wings. Around the Corner is a very popular Lakewood bar that Steve I and used to frequent in our youth. Their black pepper wings are some of the best we’ve had and they did not disappoint! 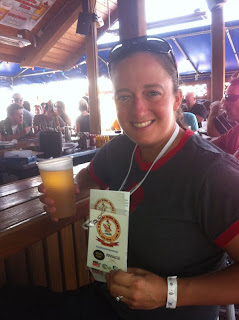 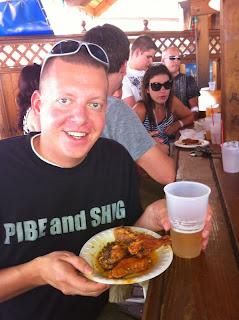 Next up was the Harry Buffalo and their Thai Chili and Hot Pepper Buffalo wings. 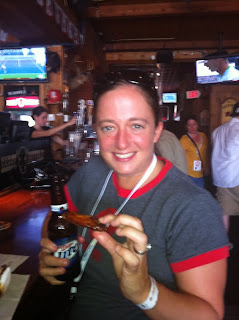 With a crowd of 800 people, we knew we had to move fast to get ahead of the group, so we quickly moved onto The Riverwood Café where we enjoyed their Medium Buffalo and Honey Chargrilled wings. Their lightning fast service helped move us along. 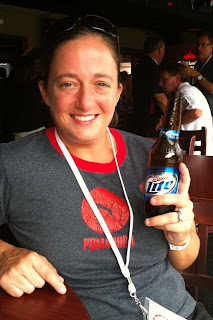 At this point we were on a mission. We took our voting and note-taking very seriously and we didn’t want to get caught amongst the leisurely wing walkers. Eating only two wings each (rather than four) at each bar gave us an edge. Our fourth stop was the Avenue Tap House/Guy's Pizza where we tasted a Mild Buffalo and newly released Bang Bang wing. 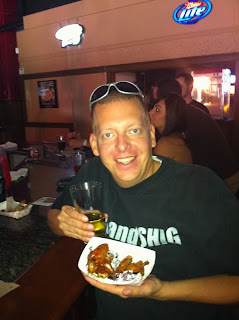 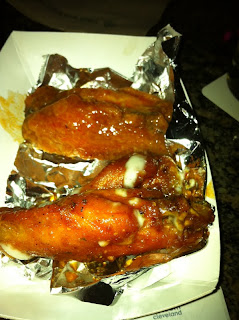 Eddy & Iggy's was next with their Medium Buffalo and Bayou wings. Although the meat to sauce ratio was greater than we prefer, the Bayou wings provided the best heat thus far in the competition. 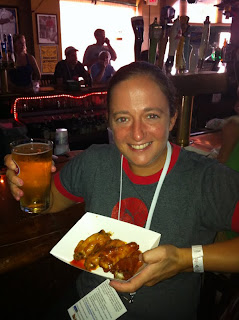 Bar # 6 was Pug Mahones with their Mild buffalo and Sweet Heat BBQ. They were the second worst wings on the crawl (see next stop), so we saved our appetite and made room for their $1 beer. Despite having terrible wings, there is something to be said for a cheap beer :) 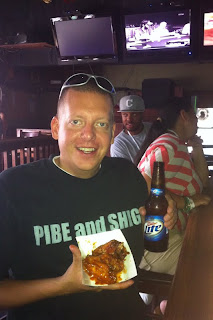 Geppetto's was next…I didn’t even take notes on their wings. They were that bad. And their beers were $2.25…The most expensive thus far! It’s no wonder we never go there. Oh well. We took a picture anyway. 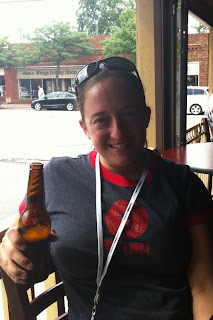 Midtown Booths Tavern is a new bar…actually an old bar with a new name. Steve and I have proudly made our way to all (but one) bar in Lakewood. When a place changes names, it usually means its changed ownership and has made some improvement. Previously called The Drink, this was on my “Top Five Least Favorite Lakewood Bars” so I was leery to enter, but surprised to taste their delicious Jamaican Jerk Dry Rub wings. So what if they were a little salty…that’s what made them so so good. Their Medium Buffalo wings were average. 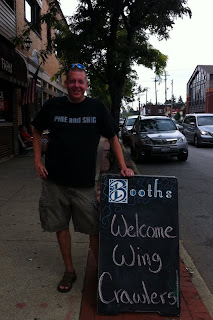 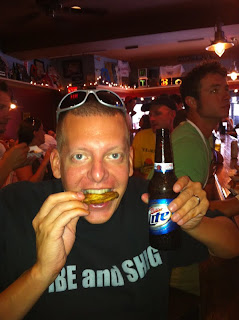 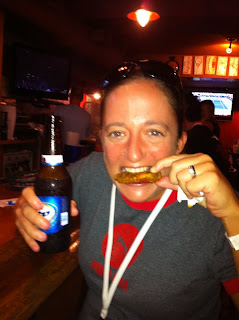 Plank Road Tavern is another fairly new establishment that we’ve visited a few times and enjoyed the burgers, service and clientele. I’ve actually never ordered anything but their peanut butter and cream cheese burger. Don't knock it until you try it! Steve and Sean enjoy the chorizo burger with egg, bacon and cheese. Their wings were truly outstanding. We loved both the Hot Buffalo and Chipotle BBQ and were tempted to vote them as our favorite in both categories. 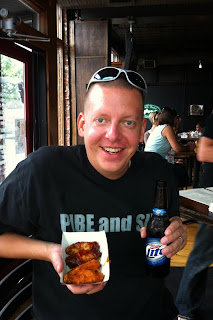 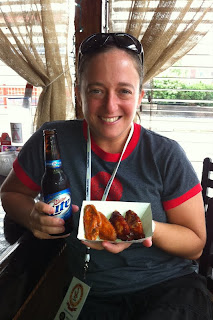 Stop #10 was Merry Arts which is conveniently located at the corner of my mom & Rich's street. As we approached, I gave them a quick call and they met us for a drink. Their Buffalo and BBQ wings were good, but not great. 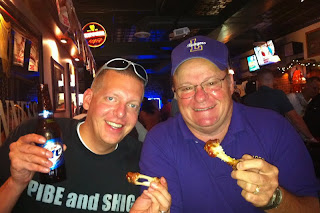 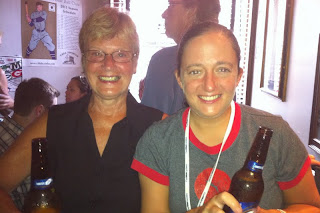 Deagan's Kitchen was our 11th and final stop on the crawl. Deagan’s is a fairly new gastropub which was recently named the best new restaurant in Cleveland. Within a short walk from our house and the home to my favorite beer cocktail (Black Velvet, which is Guinness and Champagne) we’ve been to Deagan’s several times for food and drinks and knew they’d provide an excellent wing. Although the flavors weren’t anything out of the ordinary, they were a high quality wing with little fat. They were at the top of the list. 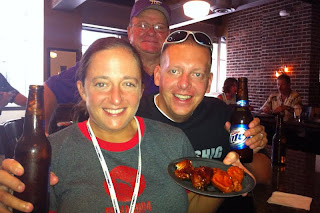 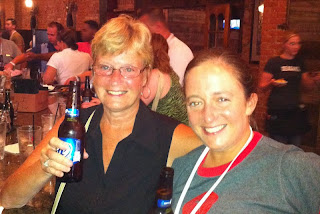 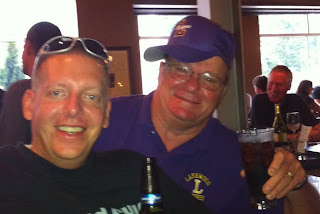 When it was time to cast our vote, we reflected back on our notes (we had a lot of notes!!) and chose Around the Corner, Plank Road and Deagan’s as the winners. Having to choose only one wing in each category (buffalo and specialty) we decided….
Buffalo: Plank Road (Hot)
Specialty: Around the Corner (Black Pepper)
After all votes were cast, the official winners are listed below. Based on these results, I think Steve and I could be judges in the future!!
Best Overall Wings: Deagan's
People's Choice Buffalo: Riverwood Cafe
People's Choice Specialty: Deagan's,
Judge's Choice Buffalo: Plank Road Tavern
Judge's Choice Specialty: Around the Corner
Six hours, 44 wings, 11 bars…that sums up our 2011 Wing Crawl experience. We love Lakewood and this was just another awesome adventure around the city we call home.
Posted by Shannon at 11:28 AM