For many years, the Cleveland marathon ran through Lakewood and other Westside suburbs. I was one of the cute little kids (yes, I was adorable) that high-fived the runners as they ran past me and I was always overly excited when I saw someone I recognized. While in elementary school, my mom, Sean and I worked the marathon for $20 apiece…Sean and I used it as our spending money for our summer trips to Cedar Point. Can you imagine how much fried cheese-on-a-stick you can buy with $20?! I know, overwhelming. We worked the water tables and I was always the littlest of the water handlers. Runners would grab the cup out of my timid hand and it would spill all over me :) I guess I wasn't cut out for the cup-holding business. Oops.

Although the half marathon has only been popular on the race scene for the past five years, its distance is the reason running has become so popular, particularly with women and former marathoners. It’s still a challenging distance, but not as grueling as a 26.2 mile marathon and not as routine as a 6.2 mile 10K. Having to balance work, family, training and injuries, there is only a certain percentage of the population that has the time, motivation and injury-free body to train for a marathon. For example, there is an older guy that runs with me at the YMCA. He ran the Boston Marathon on April 18th and then ran Cleveland on May 15th...and finished first in his age group (65-69) with a time of 3:58:42. That is extraordinary and not in my realm of thinking. Contrary, training for 13.1 miles takes motivation, careful planning and a lot less time, while the recovery and risk for injury is incomparable. This is more my style :) 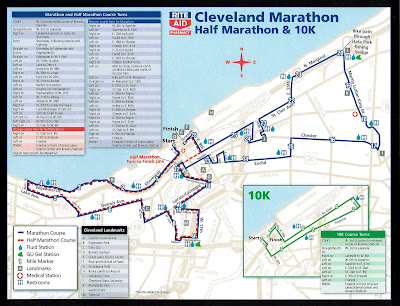 It was only two years ago that I ran my first competitive race as an adult and it was the Cleveland 10K on May 17, 2009. I signed up so I had motivation to run other than for its overall fitness value. I struggled through the 6.2 miles, but knew I enjoyed running and wanted to do more of it. I didn’t have speed, but I had endurance…I wanted to run farther. I ran the Akron half marathon, then Myrtle Beach and Columbus. I endured a stress fracture in my hip just before the 2010 Cleveland half marathon, but bounced back for a handful of 5K’s, a 5-miler and the 2011 Myrtle Beach half marathon. It was finally time to run the race I grew up watching, working and admiring. 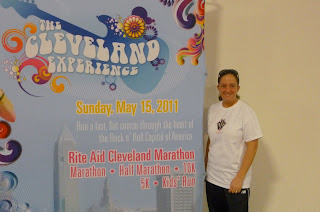 With a start time of 7 am, we were up at 5:30 and out the door by 6:00. With so many streets closed, we had to park several blocks away and arrived at Browns Stadium just before the start. 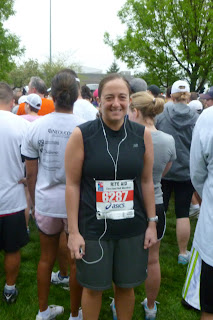 Thousands of spectators (including Steve) were crowded around the muddy grass near the stadium and cheered as the race began. With so many people corralling into the street, it took over seven minutes for me to cross the starting line. 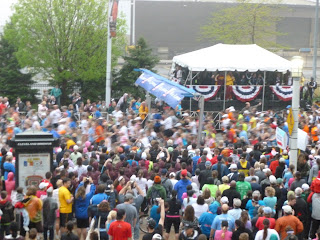 As I ran through the streets of Cleveland on Sunday, I looked around and marveled at the 1,000’s of people that stood outside in the rain and cold to cheer on their family, friends and complete strangers. No sporting event, concert or festival can make you feel as tight of a connection with Cleveland as running the marathon or half-marathon. There were even organized cheer parties throughout the course. 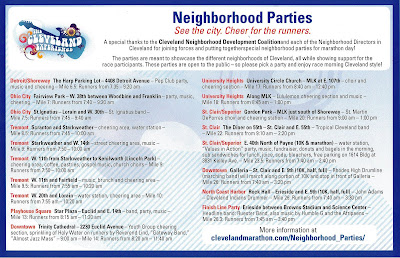 As you run the streets and see people cheering for you, you can’t help but forget the pain and just smile. I made sure to high-five every little kid (and a few adults) that were there to cheer on the 20,000 runners. I gently grabbed the cup out of the smallest water handler and always said thank you. It’s my hope that when these kids grow up, they’ll want to run this race just like I did. 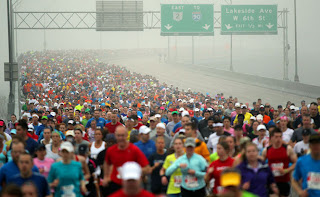 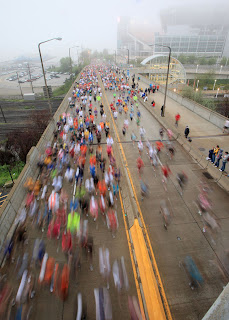 Overheating and leg exhaustion are what hold me back from running longer distances. My heart and lungs are champions! With degrees in the 50’s and a slight drizzle, the weather was perfect and overheating wasn’t an option. My legs on the other hand, were just slow. I finished in 2:31:18, which isn’t my best or my worst time. Once I started, I just couldn’t get my legs to move any faster! I never considered stopping and just kept plodding along and smiling at my surroundings. As always, my husband (and #1 fan) was there to cheer me on. I found (and high-fived) him at the start, mile 5, mile 9 and the finish. While I’m “just running” he is navigating his way around the closed streets, trying to get there before me. Let’s just say, he was a little stressed and never even had a chance to sit in the chair or break into the cooler that he had packed earlier that day. 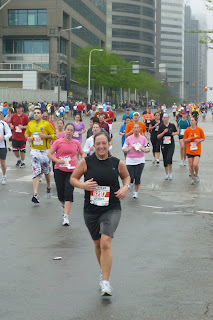 What the city of Cleveland has to do to have a completely closed course is remarkable. The number of volunteers, race officials, police and city workers that it takes to put on this race is awesome and I truly appreciate and respect what they do so that I can simply run a race. Cleveland had over 19,000 race participants (in comparison, Myrtle Beach had 8,000) and the course was really fun and flat with the last ½ mile downhill…Hallelujah! 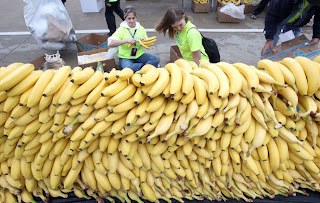 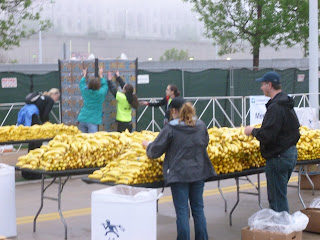 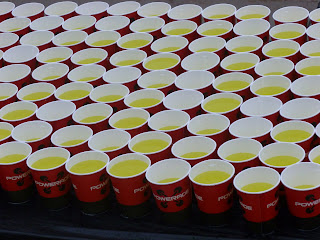 Of all the races I have run, this was without a doubt my favorite. Amazingly, it was a race run in my own backyard. There wasn’t a long drive, hotel stay, pre-race or post-race dinner out. It was me running 13.1 miles through the streets that I have grown to love in a city that I adore. 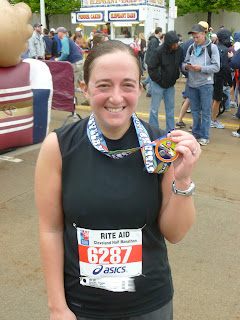 After the race, I had a snack and redeemed my free beer (of course). Steve had packed me some extra clothes, socks and shoes because although the weather was fine to run in, it was not fine to stand in! Not only was it cold and rainy, but the finish was next the the lake and the winds had picked up! A cold beer only made me slightly hypothermic :) 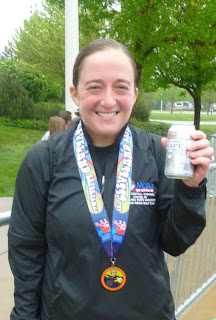 We met my mom and Rich for a celebratory mimosa, then Steve and I went home for a much needed nap. We capped the night off with a congratulatory chicken enchilada dinner, which was simply delicious.