On the evening of my 31st birthday, LeBron James made his “Decision” to leave Cleveland….147 days later, he made his return and I wasn’t going to miss it for anything. I was excited and the city was excited.
There was definitely a buzz around Cleveland and the hoopla around this “event” was pretty spectacular…The tickets for the game were selling for more than any other non-playoff game in Cavs history. Our $89 tickets were selling for $300 apiece online. The local restaurants and bars that have lost so much since LeBron’s departure were embracing this opportunity…One bar served “Witless” beer, a locally brewed beer mocking LeBron’s “Witness” marketing campaign…another featured a specialty drink called “The LeBron” which combined “Arrogant Bastard” and “Blithering Idiot” beers. The bar we chose to visit showed LeBron highlights and lowlights before the game. That was a little depressing…
The National media couldn’t get enough of this story…What would the fans do? What would LeBron do? Will LeBron do his famous talc toss? Has the city begun to recover? Why doesn’t Cleveland just get over it? If you turned on SportsCenter for one minute during the last week, you knew when and where this game was going to occur. We knew there would be a certain number of idiots that made the city look bad, but we were okay with that because that’s all part of the fun…This wouldn’t be story without the idiots! 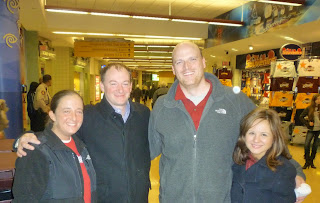 Sean & I were joined by our friends Todd & Gina. We all agreed that the atmosphere of the game was amazing. It matched the intensity of any Cavs playoff games I have attended. The fans booed every time LeBron touched the ball, they chanted a**hole, Akron hates you, and (my personal favorite) Delonte. The game itself was a disaster. LeBron could have easily scored 50 points, but settled for 38 and sat out the entire 4th quarter. The Heat finished with a 118-90 win over the Cavaliers. Ouch. There were very few incidents at the game and I have a feeling that the media will make it out to be more of a spectacle than it was. The environment was consistent with what you’d expect from passionate blue-collar fans…and the official final count from The Q was 1 arrest and 4 ejections. I was actually hoping for more.
Day one of my spectacular sports weekend is in the books.
Let’s hope I survive the rest of it!
Posted by Shannon at 12:18 PM