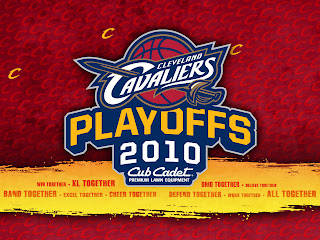 It's that time of year again!!!
Back in the day, April-June was the time of year when we would unwind and get ready for summer. We'd do yardwork, grill out, etc. etc. That was also when the Cavs won 17, 29, 30 games a year and didn't have a chance at making the playoffs, let alone winning a series. Well times have changed and now our lives happily revolve around the NBA Playoffs, with hopes and dreams that we'll be consumed through June and transition smoothly into summer! The yardwork will just have to wait :)

Similar to last year, our beloved Cavaliers finished with the best record in the NBA (61-21) and secured themselves home-court advantage throughout the playoffs. We're hoping last year doesn't repeat itself and the Cavs not only make it through the Eastern Conference, but they win the NBA Championship! We're looking forward to an exciting few months... 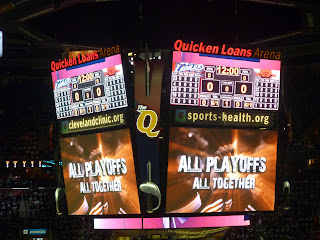 This year's theme is "All Together" 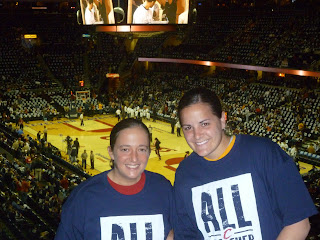 My friend Britt and I attended Game 1 together. We had an awesome time and received our free "All Together" and also "All Ugly" t-shirts. Cavs won 96-83. 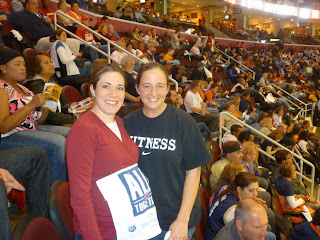 My friend Maggie attended Game 2 with me. I've know Maggie since high school and we lived together in college, so it was nice to catch up. It was a great game and we were very happy to see the Cavs pull out the 112-102 victory. We also got free Mac n' Cheese. Free stuff is always fun! 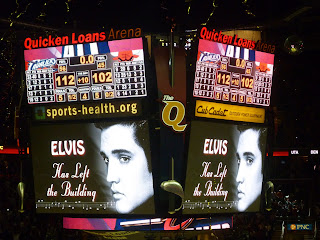 We had a mini watch party (...also tried to watch some of the NFL Draft) at our house for Game 3 with Sean, Britt and Lia. It was a disappointing game and we were sad to see the Cavs fall 106-108...Steve was particularly sad because this loss also meant that he'd have to work Game 5 in Cleveland on Tuesday (4/27), but I'm hoping for a series-clinching Game 5. Go Cavs!

Steve and I watched Game 4 at our house and we were in awe at how great the Cavs played. They truly looked like a CHAMPIONSHIP team! It was pretty exciting. LBJ was magical as he recorded his fifth career postseason triple-double with 37 points, 12 boards and 11 assists, including his buzzer beating half court jump shot to end the first half...really awesome. 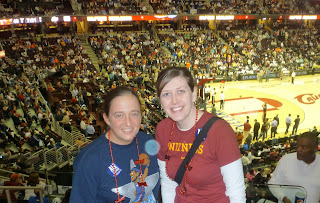 Alex and I went to Game 5 together and we had a really great time! We never get a chance to hang out without Sean & Steve, so it was nice...No offense boys! 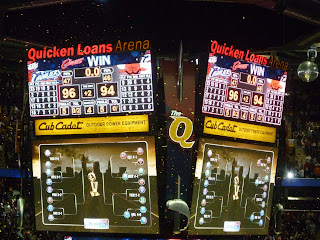 This was a game that was too close and we were on the edge of our seats. Thankfully, the Cavs pulled through and won 96-94. Despite Lebron's near triple-double (19 points, 10 rebounds and 9 assists), I felt like I was watching Jekyll and Hyde. After Game 4, I was so relieved…The Cavs seemed driven and ready to win. LeBron was phenomenal and I couldn’t wait for Game 5...but they looked like a completely different team! I am so excited about this Cavalier team. They are the best Cavs team ever and I believe they are the best team in the NBA…I know the greatness they’re capable of because they showed it in Game 4. I just want them to play like that all the time :) It’s a simple request.
I'm glad this series is over...BRING ON BOSTON!
Posted by Shannon at 1:59 PM