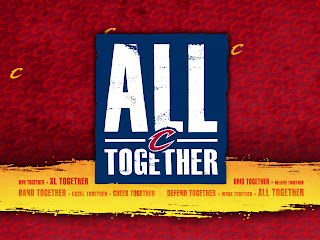 In the Eastern Conference Semi-Finals, the Cavaliers faced the Boston Celtics with Game One taking place in Cleveland on Saturday (5/1). The Bulls series went as expected, with Chicago taking one at the United Center. The Cavs didn't play with the intensity that I was looking for, but I'm hoping that changes for the Celtics series. It has to. The Celtics are going to play physical and they’re going to do all the things necessary to beat the Cavs. Afterall, the Cavaliers are the only team in the NBA to advance to the Conference Semis five straight seasons and their 65 games of postseason experience is the most in the league over that span.
Two years ago, Cleveland faced Boston in the same series...the Eastern Conference Semi-Finals. Boston was the #1 seed, Cleveland the #4 seed and the Celtics had home-court advantage. How did that series end? Boston won in seven games and went on to win the NBA Championship. This year, the seeding is reversed...Wow! Isn't that poetic? Let's hope the Cavs take care of business (preferably in less than 7 games) so we can move onto the Conference Finals.
Let's Go Cavs! 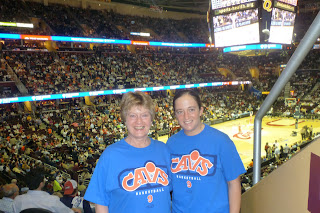 My mom and I attended Game One together. 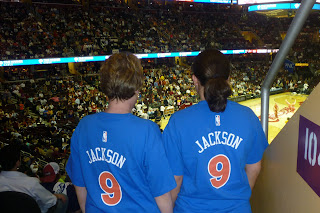 Yes, we are wearing matching Cedric Jackson t-shirts. Cedric is a former Cleveland State player who played for the Cavs over a 20 day span this year. The Cavs got these in last week and Steve swooped up a bunch before they went out for donation. I kept a few for my family and gave the rest to CSU men's basketball. Kinda totally awesome, yet funny at the same time... 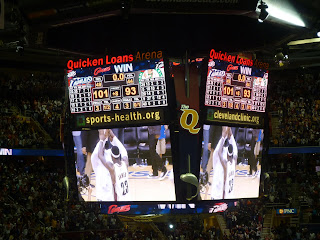 Moving on to Game One…Let’s just say, it was a game that aged me a few years. Cleveland trailed through most of the first three quarters and by as many as 11 points, but momentum shifted at the 5:16 mark of the third. Mo Williams threw down a massive (and first of his Cavs career) dunk over Paul Pierce…sending the 20,562 in attendance totally nuts and giving the Cavaliers new life. Mo would go on to score Cleveland’s next six points and the Cavs would go on a 21-9 run and take a one-point lead heading into the 4th quarter (79-78). 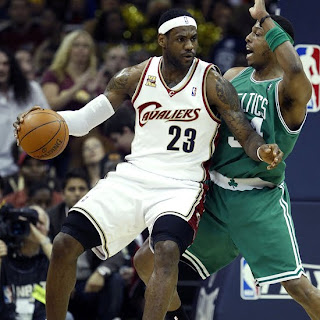 LeBron went on to score 12 of his 35 points in the fourth quarter and the Cavs outscored Boston 22-15, including 7-0 in the final 2:16, to win 101-93. LeBron (bad elbow or not) finished with 35 points, 7 rebounds and 7 assists. The Cavs desperately needed this win to keep home-court advantage alive. I was glad they did :) 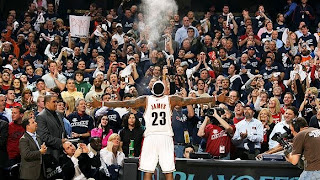 I expect this to be a very tough series and am looking foward to some exciting games. Game Two is Monday and my brother Sean (my typical gameday companion) will be in attendance with me. It was very nice of him to give up his seat for these first 4 home games, but I expect that he will be staking his claim for the remainder of the playoffs. I don't blame him. 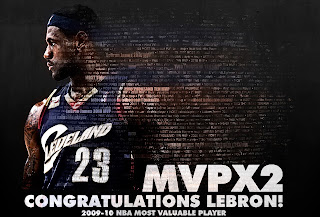 On Sunday afternoon at a packed Rhodes Arena in Akron, OH, LeBron James received his second straight Most Valuable Player award – taking 116 out of 122 first place votes and winning in the biggest runaway since his teammate Shaquille O’Neal took the honors in 1999-2000. LeBron’s numbers, as always, were off the charts in 2009-10. He averaged 29.7 points, 7.3 boards and a career-high 8.6 assists. 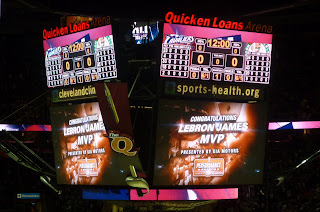 GAME 2
There’s little to be said about Game Two of this series…The Cavs play uninspired basketball and I was saddened by the loss. We saw David Stern present LeBron with his MVP trophy, by which LeBron followed with a very un-MVP performance. 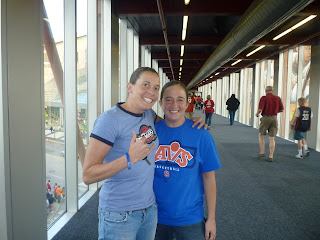 Amy and I did go to happy hour before the game and that was fun. 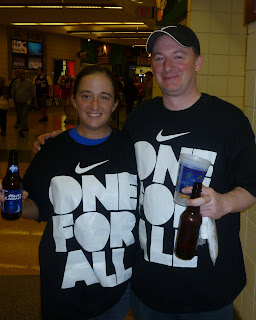 I guess Sean and I made the most of it and we did get another UGLY t-shirt. Really, really, really ugly.

Anyway, the Cavs were down by as many as 23 points and despite a few minutes of good basketball in the fourth quarter, eventually fell to the Celtics 104-86. When it was all said and done, the Celtics had stolen homecourt advantage from the Cavs. I’m expecting the Cavs to perform tremendously better during games 3 and 4 in Boston, and whether they like it or not, we’re demanding three more wins and will be cheering from home! 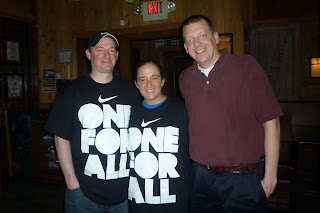 Despite the loss, Sean and I still waited around for Steve to drive us home. He met us after work at The Harry Buffalo...our pregame and postgame bar of choice.

We watched games 3 and 4 at home. Game 3 was incredible. The Cavaliers quieted the Celtics crowd immediately, opening up a 21-point lead behind LeBron’s 21-point quarter. Boston never got closer than 16 points for the rest of the night, with the Wine and Gold avenging Monday’s loss in style – demolishing the Celtics, 124-95, on Friday at the Garden and handing the Celtics their worst home postseason loss ever. The win was also the Cavaliers first playoff win in Boston since 1992. LeBron finished with 38 points, 8 rebounds and 7 assists and Cleveland had regained home court advantage. I was feeling good. 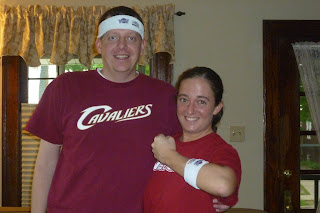 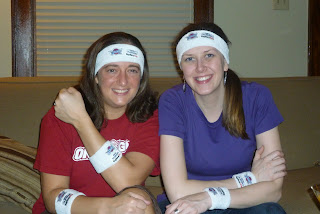 We're all banded together!

During the game, a gigantic storm blew through Lakewood. There were extremely high wings, golf ball sized hail and a tremendous amount of damage. We were lucky not to encounter any tree damage, but my mom was not. Their street was hit pretty hard and they had a large limb fall on their fence. 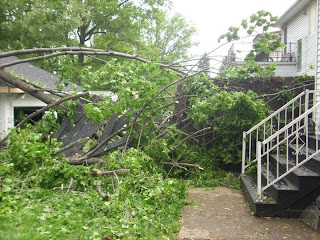 Not only was Sunday Game 4, but it was also Mother’s Day and my mom’s Birthday! I started the day with brunch with my sister and my mom. We’ve made it a Mother’s Day tradition and it’s always so nice. This year we met at the Union Club. 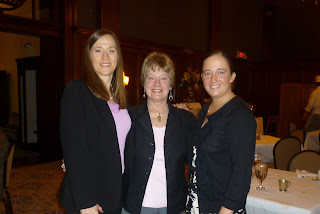 Following brunch, my mom, Rich, Sean & Alex met at our house where we watched Game 4…It was a much different story than Game 3. During much of this series, Boston’s Rajon Rondo has been the best player on the floor and in game 5, he was unstoppable, finishing with game-highs in points (29), rebounds (18) and assists (13). It was a very impressive performance. 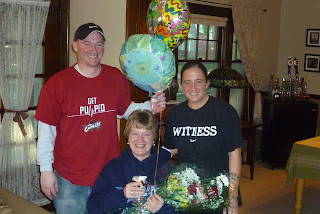 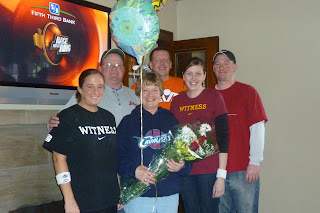 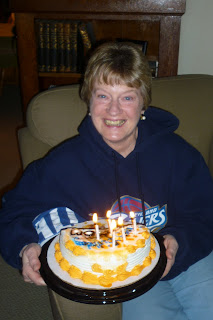 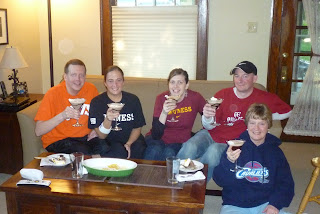 With the series tied at two games apiece, the action shifts back to The Q on Tuesday night, where the Cavaliers will look to rebound with another win. Let’s go Cavs!

What is going on?! I have few words to say about Game 5, other than the obvious. It was awful! I thought Game 2 was the worst performance I’d seen, until I saw Game 5…Boston handed the Cavs their worst home playoff loss in history with their 120-88 win. This could be the end of a nice, but incomplete ride and we may have witnessed LeBron’s last game in Cleveland, but I must…stay…positive.

In this postseason, it seems like the only thing that has truly motivated the Cavaliers is having their back against the wall. Well Cavs…meet the wall, because that’s what Game 6 and 7 are…a really big wall. The Cavaliers head to Boston with their season on the brink. They rebounded well in Game 3 and will be fighting for their postseason lives when they return for Game 6 at the Garden. 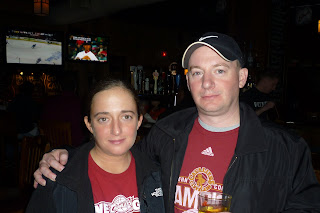 Sean and I after Game 5…Clearly we were not very happy.

Well, game six proved to be another disappointing night. Once again, a Cleveland sports team disappoints its fans…it's just what happens to pro sports teams in Cleveland. They can't win it all. In 1964, the Browns won the NFL Championship (not the Super Bowl). Since then, Cleveland sports fans have seen Red Right 88 in 1981, The Drive in 1987, The Fumble in 1988, The Shot in 1989, Game 7 in 1997…and now the 2009 and 2010 NBA Playoffs…This isn't anything new.

Cleveland is home to the longest drought of championships by any city that has at least three professional sports franchises, so the truth of the matter is that this is the reality of our city. Great season by the Cavs, disappointing finish. Only In Cleveland can a team finish with the best record in back-to-back regular seasons, and have the MVP on its roster, and not even make the Finals.

The 2010 NBA Playoffs make no sense. It defies logic.
Only In Cleveland.

If you aren't from Cleveland, you can't possibly understand. Don't try to understand, because you can't.

Now we look forward to July 1, 2010…Will LeBron stay or will he go??? Thousands of jobs are at risk. The weight of the city is in his hands.
Posted by Shannon at 11:40 AM