This past weekend was a lot of fun. Not only did my brother Todd & his expecting wife Erin drive in from New York for a visit, but two of my four cousins drove from Minnesota to see the rest of the Mott's. Therefore, we found it only appropriate to have a mini-Mott family reunion along with a Mottastic Baby Shower for Todd & Erin.

On Saturday, we had a mini-Mott family reunion at my Dad & Berneda’s house. It’s the first time in three years that all of my brothers and sister and I have been together (since my wedding) and the first time in ?? years that we’ve seen any of my cousins. It was a really nice day with great conversation and lots of Cornhole (as usual!) 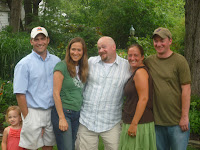 My brothers, sister & me ~ Travis, Tracy, Todd, Shannon & Sean...Kristin wanted to be in the picture too :) 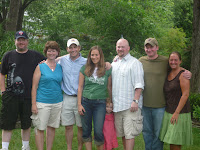 Todd & my Dad during a friendly game of Cornhole 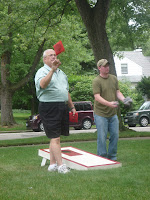 My niece, Kristin Marie...my guess is that either Sean & Steve were chasing her at this point. 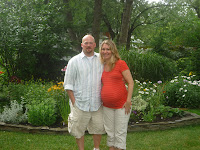 The following day I hosted a small baby shower for Erin & Todd. It was a nice and relaxing day where a bunch of the Mott women were able to get together and talk. Personally, it was the best baby shower I’ve ever been to :) We had great food, cocktails, Rock Band, American Idol Karaoke and Cornhole! 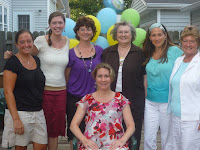 Shannon, Alex, Wendy, Berneda, Tracy, Coletta & Erin (Leslie was there too, but left before the picture was taken...) 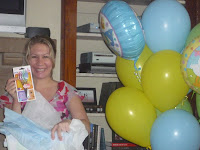 During the girly part of the shower the guys all headed down to Whiskey Island to waste some time then joined back with the girls to play Rock Band and several games of Cornhole. It was an all-day event that took us late into the evening and left us all exhausted as we headed into work on Monday. 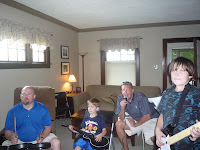 Todd on drums, Daniel on bass guitar, Steve on vocals, Joshua on guitar

Family is such an important part of life and this weekend gave me the opportunity to spend a lot of time with the people that I love most. It was great fun and regardless of how many years pass until we see each other again, we created memories this weekend that will last a lifetime.
Posted by Shannon at 9:36 AM