It’s been almost six weeks since I received the go-ahead to resume running again. I’ve slowly progressed from 2 miles to 3.5 miles, running three days a week. Prior to my injury, I was running 6+ miles, 4 days a week, but have been advised to alternate running with other activities to limit the impact on my hip. In order to train for the half marathon in February, I'll eventually have to increase the frequency, but don’t anticipate consecutive days for another eight weeks. I’ve been using our Concept 2 rowing machine another 2-3 days a week, so I’m doing my best to follow doctors orders with alternate cardio work outs.

Anyway, in an effort to get back into racing mode, I decided to sign up for a few local races to see how my mind, legs, lungs, hip, etc. responded. I’ve been running solely on a treadmill, so a road race is an important step towards my real recovery. Hermes Sports & Events organizes several races in the Cleveland area so I went to their site and found two 5K’s (3.1 miles) in October at Lakewood Park…a park about 1.5 miles from our house.

The first race was the Nature’s Bin 5K. For those who know Lakewood, the route started at Lakewood Park, ran down Edgewater to Summit (my mom's street), then down Lake to Kenneth to Webb and back to Lakewood Park. Because a short part of the race went up my mom’s street she, Rich, Molly & Daisy (dogs), Steve, Sean & Alex posted themselves at the corner of Summit & Lake so they could see me at the 0.75 and 2.75 mile markers. 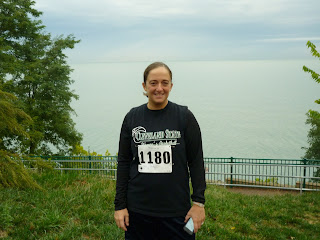 Here I am before the race... 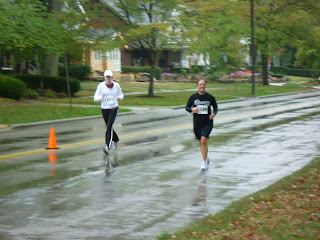 Here I am during the race...
My friends Britt, Lia and their tiny dog Deuces (he’s a Teacup Chihuahua, so I’m not kidding when I say he is tiny) were staying at our house for the weekend so they also came to cheer me on. I had quite a crowd…7 adults and 3 dogs. I definitely think I had the largest fan club. Steve is usually my only cheerleader so he was very happy to have company, especially in the light drizzle and 50 degree temps. They were all very brave and prepared themselves with chairs and umbrellas. 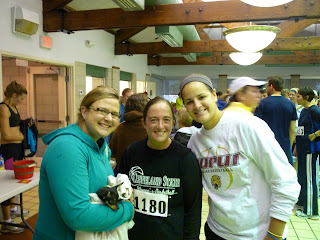 Here are Lia, Dueces, Me and Britt after the race... 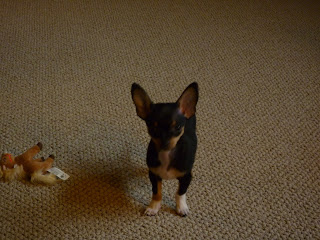 I finished in 30:10 (9:44/mile pace) and 11th in my age/gender group. Regardless of whether I’m running 3, 5, 10 or 13 miles I always seem to maintain the same pace (approximate 10:00 minute mile). I think it’s because it’s more about the rhythm of the run rather than the speed. I guess you can say my legs and my lungs aren’t really into the speed of running :) I’m not trying to be faster; I just want to have fun.

The next 5K is the Great Pumpkin 5K at Lakewood Park on the morning of Halloween. Maybe Steve will run this one with me. It'll be one year after his foot & ankle surgery, so it's actually quite poetic! I've begged and pleaded, but he still won't bite. No pressure ;)
Posted by Shannon at 9:28 AM