I never seem to remember August. It never fails. Due to our work schedules, Steve and I take our “big” vacations during July and when we return, we seem to always have projects and activities that make time fly. Let’s just say the first week in August was a total blur. I figured I’d write about it so I could actually remember...some of it!
With about 24 hours notice, my brother Todd stopped in on Sunday night (August 1st). He was here for less than 24 hours and came without Erin & Zachary :( but we still managed to enjoy the time. He came. We saw (and grilled out). He went. The End. It’s always nice to see my big brother :) 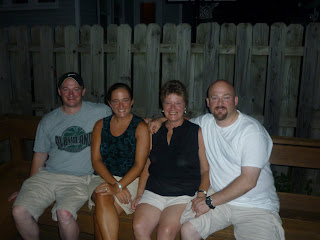 As if we hadn’t seen enough of each other, Jenny and Bob popped in for a very short visit on Wednesday (August 4th). We enjoyed martinis at Players and pure deliciousness at The Melt…Yes, we waited 1.5 hours for our table, but it’s all part of the experience! It’s never stopped us from going in there before, so we insisted that Bob & Jenny have the true Melt experience. We capped off the night with some Rock Band and Karaoke Revolution…Do I really have to tell you whether we had a good time? 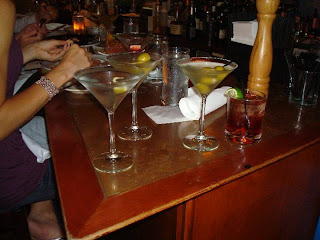 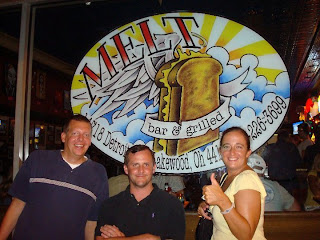 On Friday (August 6th), my Dad, Sean, Steve and I played in the CSU Women’s Basketball Golf Outing at Bunker Hill Golf Course in Medina, Ohio. After not playing all year, we all put on a great performance and had an absolute blast. Playing a scramble together is always fun, but our expectations were pretty low this year due to our lack of play…We ended up finishing 10 under, which was our best showing ever, but unfortunately only good enough to finish in second place. Oh well, there’s always next year! 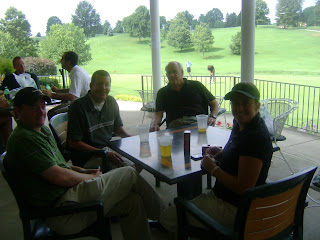 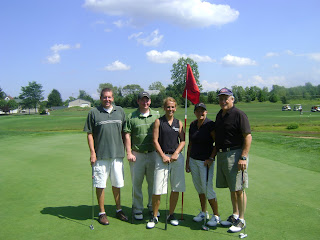 That night (still August 6th), we had a surprise visit from Eric and Roger…Two of Steve’s Connecticut friends from the early years (elementary & high school). They were on their way to the Sturgis motorcycle rally in Spearfish, South Dakota and decided to pop in around midnight. We ordered them a pizza, gave them a cold beer along with a place to sleep and then they were on the road again in less than 6 hours. I never even thought to take a picture, so I figured I'd add this one taken at our wedding... 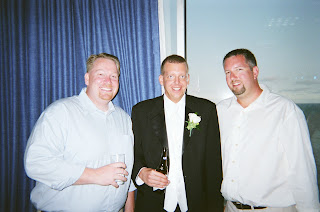 Did I mention this week was a blur?
My cousin Matt and his wife Jenny had a small wedding ceremony at the Oberlin Chapel on July 16, but we were unable to attend since we were on vacation. After they returned from an Alaskan cruise, they threw a rockin’ party in their backyard on Saturday (August 7th). It was a lot of fun. I apologize for not having any pictures of the bride and groom. It was one of those nights when too much time had passed before I realized I hadn’t taken any pictures yet…I hate when that happens. 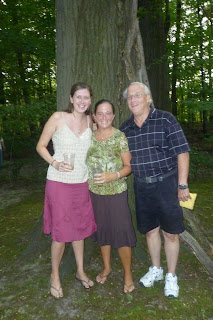 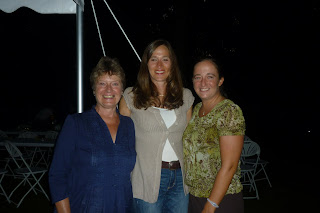 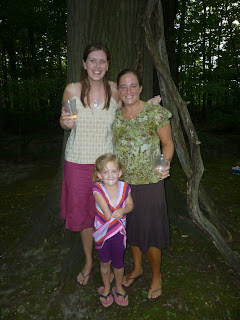 The rest of the month has been busy as well. I started physical therapy for my hip and have patiently waited for the go-ahead to resume running. I had another set of x-rays on Tuesday (8/24) where I received the news that I had fully recovered and could begin running again in small and slow increments. My doctor told me that as long as I was smart about my training (rotating other cardio exercises, not increasing mileage too fast, etc.) there should be no reason for me to get back to where I was prior to my injury.
As far as what we’ve done around the house…First we put up some wood along the interior of our screened porch. After we re-screened it last year, we have encountered a lot of problems with storms blowing out some of the screens through the staples. So, with the help of my handy dandy dad, we painted, cut, and screwed in wood along each of the screens so that it will hopefully prevent it from happening again. It’s also much more aesthetically pleasing so it was well worth the few hours of labor in the blazing August heat. Lunch at Angelo’s and a walk to the Lakewood Car Kulture Show finished off the afternoon. 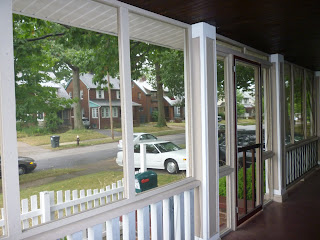 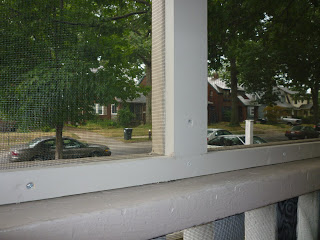 On August 21-22, Stephen went on a short golf trip with friends to Black Diamond Golf Course in Millersburg, OH.

As you probably know, I’m not one to sit around with nothing to do so in his absence; I painted the kitchen. I’ve wanted to paint it for a while and my boredom and I thought this was a good opportunity. Green is my favorite color and when we bought our house I painted the kitchen and our bedroom the same shade of green. I've always wished I had taken a bigger risk and gone bolder, so I finally did! The pictures appear more "green" than the real thing, but we both really love it and I'm so happy I took the day to do it. Here are a few before and after pictures.
Before... 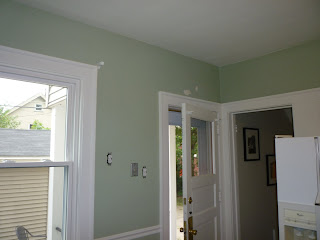 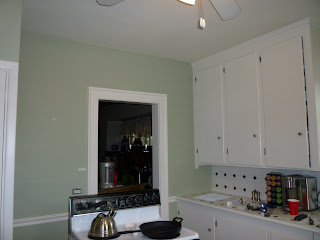 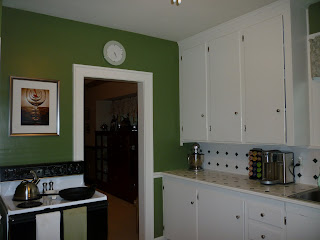 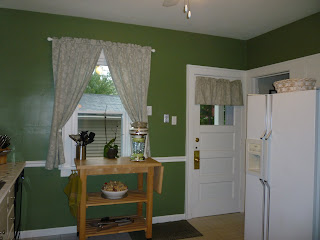 While in the painting mood, I also decided to paint a room in our basement. We have a small room that has been used as an adequate work out room, which consists of my treadmill, a TV, stereo and some storage. We've always wanted to get more use out of it and with a recent flood, the room was in need of some repair. The first step was moving everything out of the main area and painting. It was a tedious task that included the ceiling, trim and walls, but I did it and am very happy with the results...
Before... 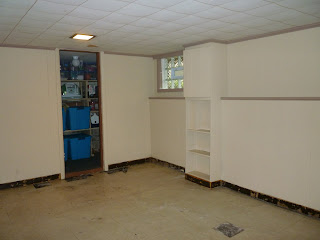 The room in the back is used for storage. It's an old fruit cellar that had a very heavy metal door. We took down the door and I will replace it with a curtain of some kind.
After... 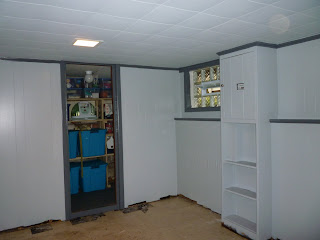 There is still some work to do, but the bulk of it is done. We have carpet and vinyl baseboards that will be installed and equipment to be ordered and set-up...including a Concept 2 Rower and a set of Power Block adjustable dumbbells. Steve has wanted a Concept 2 for as long as I can remember and due to the height of our ceilings, an elliptical is out of the question. Assuming that I'll be back running, the treadmill will be my cardio equipment of choice, but it'll be nice to have something else to use as well. Best of all, our fancy new work-out room with give us the opportunity to work out together in the comfort of our own home!
I'll post more pictures once it all comes together.
That’s it…for now! We head to Washington, D.C. over Labor Day weekend (Septermber 4-6) and then to New York’s Finger Lakes September 17-19…Until then, we plan on participating in some rest and relaxation and really looking forward to it!
Posted by Shannon at 3:59 PM