Ahhh…Memories. This past weekend, Steve and I went on a mini basketball tour and attended three college basketball games in 24 hours. Our first stop was Indianapolis for the #24 Butler vs. Cleveland State men’s game. The next stop was to my alma mater for the Dayton vs. Temple men’s game and Dayton vs. St. Joe’s women’s game. Unfortunately, CSU was not able to win the well-fought game and lost 56-58, but both Dayton teams won 70-65 and 84-57 respectively. 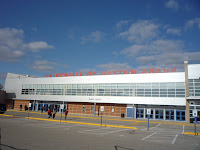 UD Arena ~ We were able to see a sell out crowd for the Dayton/Temple men's game, as well as their 19th straight home win!

My friend Kyle is now an assistant coach for the Dayton women, so she and Dave were our hosts for the weekend. While in Dayton, we visited many of my old stomping grounds and while a lot has changed…some things have not! One of the best things about UD is the student neighborhood (A.K.A “The Ghetto”). Kyle knew some graduate students that still live in the Ghetto, so they welcomed us into their humble home. In typical UD Ghetto fashion, we drank Milwaukee’s Best Light (A.K.A. “Beast Light”) and I had a great time exchanging stories and sharing the splendor in which I lived and partied for much of my time at UD. Good times…

Here is a picture of my old house at 447 Lowes. Although I think all of our parents cried when they realized where they were letting their “little girl” live, we absolutely loved this place…we just didn’t walk around barefoot, because you never knew what was on that carpet. 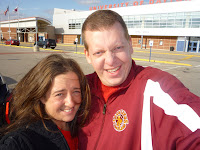 This is a terrible picture, but we realized as we were leaving that once again, we didn't have any pictures of us :) Anyway, we had a really great time a look forward to our next “tour” to unknown destinations. Memories like these should be shared with people you love, and we did just that!!