Wow! The Christmas season never seems to stop! Although Stephen had to work for much of the time, we were still able to celebrate with a lot of our family. It seemed like I was cleaning and hosting for 10 days straight, but it was well worth it and a ton of fun. We are both totally exhausted and look forward to bringing in the New Year!
It all started with a Christmas Ale party on December 18th. A few snacks, Christmas Ale, and great friends is always a recipe for fun! A great time was had by all. 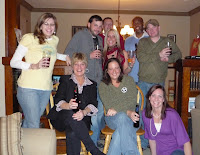 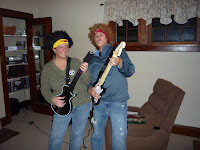 Liberty and I rocked out as we played Rock Band. We have Ben Wallace and Anderson Varejao wigs on :)

On Christmas Eve, we hosted some of my family and a few friends over for some lasagna, cocktails and games. It was nice and relaxing, not to mention fun! My nephews Joshua & Daniel had a great time opening their gifts (of course!) We also received a call from my brother (Todd) in New York to tell us that he and his new wife (Erin) are expecting a baby. Another Mott is always exciting news! 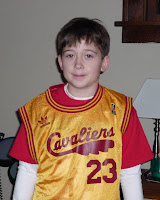 Daniel in his Daniel Gibson jersey. It was only appropriate...they're both so tiny and cute AND named Daniel! 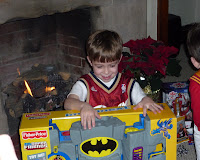 Christmas Day took us to my brother Travis' house in the morning. We sipped on mimosas as we watched Otto, Hailey and Kristin open their gifts then headed over to my sister Tracy's house for some more food, family and fun with the rest of the group. 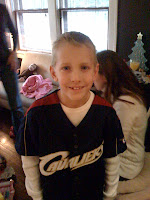 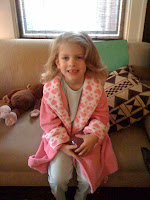 Kristin Marie posing for the picture with her new stuffed dog : )

Joshua with his new LeBron James Witness shirt and iPod. 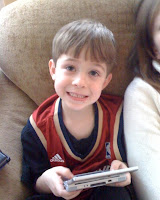 On December 26th, I hosted my 15-year elementary school reunion. Through email, facebook, and a little bit of stalking, we were able to track down almost all of the 21 graduates from the St. James class of 1993 - 14 of them showed up for the big party. It was very nostalgic and so much fun. I was so happy that I decided to have it at our house as it allowed for a more intimate setting where we could talk, laugh and look at some old pictures and yearbooks. 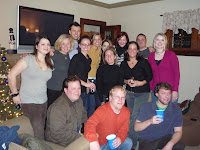 Paul and Sue arrived on the 27th and we were able to celebrate Christmas with them. Great food and conversation took up most of our time, but the biggest surprise of the weekend was when we opened our Christmas gift...hotel accommodations and 2 tickets to the 2009 Men's NCAA Final Four in Detroit...something that Stephen and I have had on our "Wish List" for as long as we've known each other (and longer!) We're still in total shock and can't even fathom, shall I say it, if UConn actually makes it this year. More importantly, we're really looking forward to sharing the experience together : )

Finally, on the 28th, Sean, Alex and I took my nephew Joshua to see Dwayne Wade and the Miami Heat face off against LeBron James and the Cavaliers. We took him to dinner and then to the game as a gift for his 11th birthday. LeBron and Wade had 33 and 29 points respectively and the Cavs won 93-86 to bring their home record to 16-0 and 26-4 overall. This has been a very exciting year for Cavs fans. 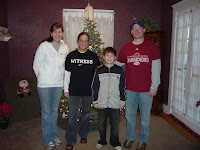 Alex, Shannon, Joshua & Sean pose for the camera before the big game! 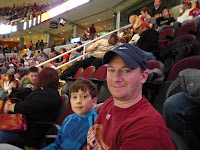 Joshua & Sean at the game 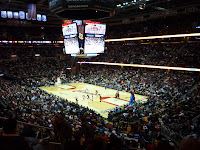 A view from our seats. Thanks Steve! 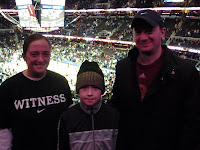 Shannon, Joshua & Sean pose for a picture as we head out. It was a great game!

It has been a very busy few weeks and we are desperately looking forward to ringing in the New Year with a little rest and relaxation.